Free State Stars secured a valuable three points at home as they beat Orlando Pirates 2-1 in an Absa Premiership match played at Goble Park in Bethlehem on Saturday evening. 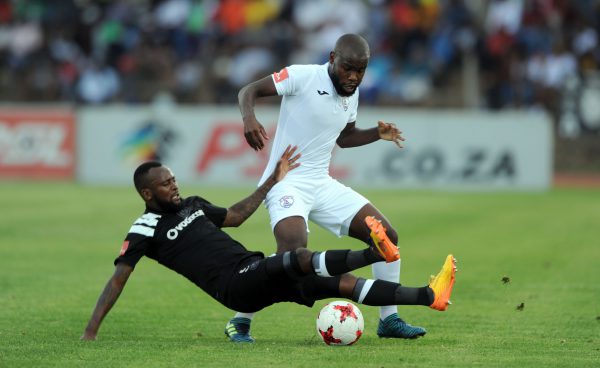 Pirates were the better team in the first period, and will return to Johannesburg in the knowledge that they only have themselves to blame after not capitalising on numerous goal-scoring opportunities.

Abbubaker Mobara, in his first start in six weeks, had the misfortune of deflecting the ball past his own goalkeeper Jackson Mabokgwane in the 54th minute, after Stars raided the Pirates half with a speedy counter attack.

Five minute later, Pirates did manage to find the back of the goal-net at the correct end of the park, when Thabiso Kutumela forced the ball home at the second attempt despite the initial stop by Stars’ No 1 Badra Sangare.

The all-important decider went the way of Stars in the 83rd minute, when a goal-mouth scramble saw Sinethembe Jantjie in the right place to secure a valuable three points for the Free State club.

Amigo Mamela was a continuous thorn in the flesh for the Stars midfield, but they were able to beat Pirates in terms of transitional play.

Stars now leap-frog the Buccaneers on the league table and have 22 points from 15 games, with their next outing set to be away to bottom-of-the-log, but league champions Bidvest Wits on January 5.

The Bethlehem side certainly do not look like a team that escaped being forced into the playoffs at the end of last season, in ending with the same number of points as Baroka FC but having a superior goal difference.

Pirates with four draws and just the solitary win from their last five league outings, remain on 20 points from 15 matches and will do some soul-searching over the festive period before hosting Baroka FC on January 6.