Tapson Kaseba scored the only goal of the game as Zambia were crowned Cosafa Cup champions after a hard-fought 1-0 victory over Botswana in the decider at the Moses Mabhida Stadium on Saturday. 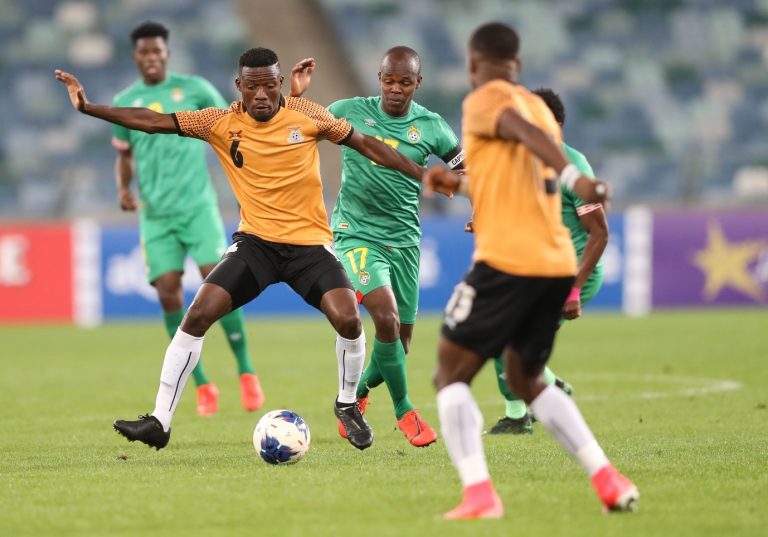 Benson Sakala of Zambia challenged by Knowledge Musona of Zimbabwe during the 2019 Cosafa Cup semifinals match between Zimbabwe and Zambia at Moses Mabhida Stadium. (Samuel Shivambu/BackpagePix)

The result means Zambia are regional champions for the fifth time, one less than gold medal leaders Zimbabwe, and lift the trophy for the first time since 2013 having lost out in the previous two finals.

For Botswana it is more heartache as their quest for a maiden Cosafa Cup title continues following a second final defeat, the previous one coming in 2016 when they lost to South Africa.

Botswana had the better of the opening half but could not make that dominance count on the scoreboard.

Midfielder Mothusi Cooper forced a good stop from Zambian goalkeeper Sebastian Mwange when his low shot from outside the box needed attention.

At the other end, star Zambian forward Lazarous Kambole was played in on goal by Kaseba, but his lob over the head of Botswana gloveman Ezekiel Morake bounced just the wrong side of the post.

Zebras midfielder Thero Setsile then saw his shot from close-range blocked as the teams went into the break at 0-0, but with Botswana enjoying the lion’s share of the possession.

They had the first chance of the second period too when Segolame Boy’s free-kick from 25-yards beat the all, but not Mwange, who was able to make the save.

The breakthrough finally came on 78 minutes when Kaseba stooped to score with his head, the ball eluding Morake in the Botswana goal, a moment of huge celebration for Chipolopolo.

Kaseba should have made it 2-0 when the ball came his way shortly afterwards and, with more time than he realised he swung a boot that pushed the ball onto the crossbar and over.

His goal sealed the win though and Zambia were able to celebrate Cosafa Cup success again.