Makhabane is counted amongst the senior national women’s team players who have managed to play 100 caps for Banyana. 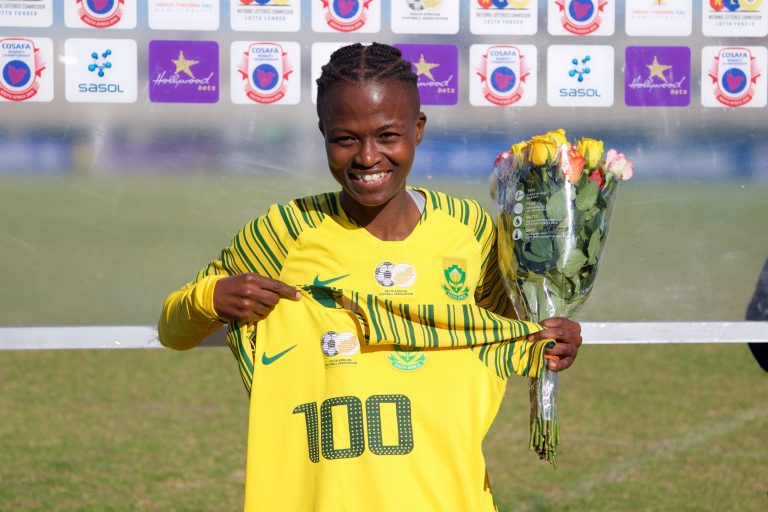 Just a couple of years ago, Banyana Banyana midfielder Mamello Makhabane thought her football career was finished after suffering a horrible knee injury that saw her miss the London 2012 Olympics.

Today, the Banyana midfielder is counted amongst the senior national women’s team players who have managed to play 100 caps for Banyana.

Makhabane reached the milestone during Banyana’s 3-0 victory over Madagascar in the Cosafa Women’s Champions in Port Elizabeth.

The midfielder says she is happy with to be counted among players who have played a century of games for Banyana, but she wouldn’t have done without the support she got family and teammates.

“I’m excited, I still in disbelief. I knew that this day will come, but I never knew when it will come. I’m really excited and thankful for the opportunity I got. I’m also thankful that the coach gave me an opportunity. She has always believed in me. I remember when I was injured, she would talk to me through texting, asking me how I’m feeling and I should not give up,” said Makhabane.

“I also had support from my family, teammates – the likes of Janine van Wyk were always there for me. But most all, I will give praise to the Almighty God because He is the one who did this possible for me.”

Makhabane and her teammates have reached the semifinals of the Cosafa Cup where they will meet Zimbabwe to make it to the final on Thursday at the Wolfson Stadium.