'There are a few things, a few reasons why Chiefs have gradually been away from that benchmark,' said the Kaizer Chiefs head coach on Wednesday. 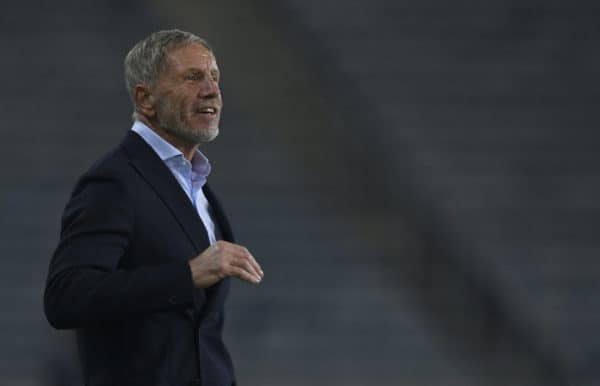 Stuart Baxter admits there is plenty of work to do to catch up with Mamelodi Sundowns at the top. Picture: Sydney Mahlangu/BackapagePix

Stuart Baxter admits that the gap between Kaizer Chiefs and Mamelodi Sundowns has widened since he was last at the club, and believes it is up to Amakhosi and the rest of the chasing pack to catch up.

ALSO READ: No Chiefs move for Ekstein, set to sign for AmaZulu

Sundowns have become a lone dominant force in the domestic game, winning the last four DStv Premiership titles, and will be favourites in Tshwane on Sunday, when they take on Chiefs in the MTN8 quarterfinals.

Baxter, who took two league titles in three seasons at Chiefs, between 2012 and 2015, returns after Amakhosi could only finish eighth last season, some 31 points behind Sundowns.

Chiefs did have the caveat of not being able to sign players, as a transfer ban prevented them from doing any business last season, while Sundowns continue to be the wealthiest side in the country, snapping up many of the land’s best footballers.

But Baxter also defended Sundowns against the idea that big-spending guarantees titles.

“The gap has increased, and it is not just that we couldn’t sign players, there are a few things, a few reasons why Chiefs have gradually been away from that benchmark,” said Baxter.

“I hope the rebuilding process will lead to closing the gap and eventually knocking them off their perch, I am sure a few clubs would like to do that. The pressure is firmly on Sundowns because of the way the club is run. It is like now PSG have signed (Lionel) Messi, now the only thing that will satisfy them is winning the Champions League.

“Having as many players as Sundowns do does increase the pressure. The bar is higher, it is up to the rest to chase them and … bring greater competition.

“I am not completely agreeing with people who say they have just signed all the best players. You still have a job to do to make a team. It doesn’t entitle anyone to win championships.”

Baxter has, at least, been able to bring on board a host of new signings ahead of the new campaign, with the likes of Keagan Dolly, Njabulo Ngcobo, Sifiso Hlanti, Cole Alexander and Kgaogelo Sekgota arriving to bolster the squad.

It remains to be seen just how many of the new arrivals start on Sunday.

“It is difficult to say, I am sure you will see some of them. Everyone has had a different start, Cole Alexander (for example) is a new player, but has had me as a coach before. Some of the lads had me as a coach in the national team. Some were here in my first stint. Training will tell us who has put their hand up, and who needs a bit more time.”