SuperSport remain unbeaten and their next opponents are Maritzburg United in a weeks’ time, while Swallows will host Cape Town City. 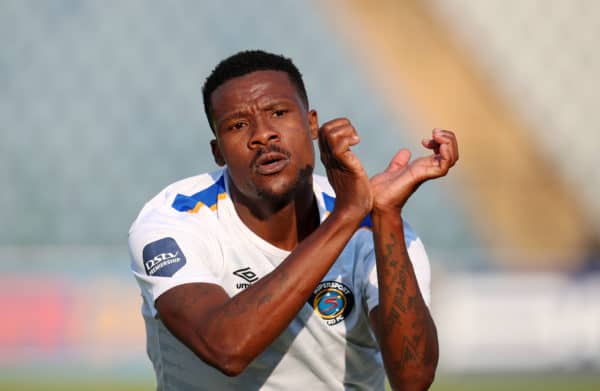 Thamsanqa Gabuza of SuperSport United celebrates goal during the DStv Premiership 2021/22 match against Swallows at the Dobsonville Stadium on Sunday. (Muzi Ntombela/BackpagePix)

SuperSport United were in their element on Sunday afternoon at the Dobsonville Stadium where they gave Swallows a 3-0 hiding in the DStv Premiership.

It all began when Moses Waiswa was presented with the opportunity to open his scoring for United this season after he was found in the box by a Nhlapho cross. His positioning was good and the idea was bright, but his execution was just not up to the same standard as his run as he headed all the way over the bar.

The goals then came flooding in as Matsatsantsa A Pitori scored two goals in quick succession. The first was a spot kick after defender Sipho Sibiya was adjudged to have handled the ball when Teboho Mokoena tried to cross it into Vries’ box. Jamie Webber stepped up to take responsibility from 12 yards and he made no mistake, sending Vries the wrong way.

Soon after, Mokoena had Swallows’ defender in a whirlpool before releasing the ball wide to Jesse Donn, who, at first touch, sent it straight to the box. Vries cut out the danger, but not entirely as he could not hold on to the ball, watching it spill to Mokoena, who lashed onto it to score his second goal of the season.

Sibiya was the culprit again when he conceded another penalty. This time he tackled Webber from behind. Gabuza took the spot kick this time around and he made sure to extend the lead with his second of the season and danced all the way to the corner spot in his new celebration inspired by popular Amapiano song, titled Bopha by Felo Le Tee, real name Tsholofelo Machine.

There might not have been any goals in the first stanza but the best chance was the one that was not taken when Keletso Makgalwa received a delightful ball from the back, finding him on his bike as he successfully beat a SuperSport offside trap. But his speed, it seems, was his biggest enemy as he tripped just before he could shoot or lay on the ball to a free Kagiso Malinga, who would’ve been the best option as all he’d need would be to tap into an empty net.

SuperSport had chances of their own that fell to defender Siyabonga Nhlapho and Thamsanqa Gabuza. Their shots were identical as they both lined them up from the left side of play after cutting in. Gabuza saw his chance going narrowly wide off the mark, while Nhlapho’s effort was on target but goalkeeper Virgil Vries was up to the task as he palmed it away to safety.

SuperSport remain unbeaten and their next opponents are Maritzburg United in a weeks’ time, while Swallows will host Cape Town City.