Benni McCarthy – Coach, street-fighter or both?

The former Bafana Bafana star has had his share of touchline fracases. 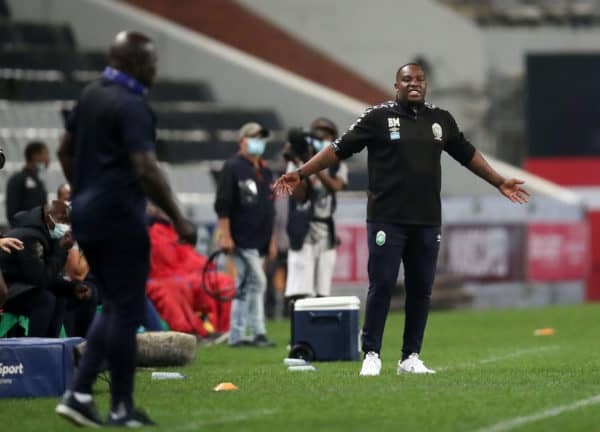 Benni McCarthy is not afraid of making his voice heard. Picture: Muzi Ntombela/BackpagePix.

If it were not for AmaZulu assistant coach Moneeb Josephs, Kaitano Tembo could’ve left the Kings Park Stadium with bruises on his face, given the uncontrolled temper of Usuthu head coach Benni McCarthy. Apparently, the SuperSport United mentor called McCarthy a ‘c**t’ when the coaches had a harsh exchange of words during a match that ended goalless this week.

McCarthy, who never holds back, as we know, responded with a jab of his own, labeling Tembo as broke and referencing the teams he played for – Dynamos, Seven Stars and SuperSport – as opposed to McCarthy’s rich career in Europe where he wore the jerseys of Ajax Amsterdam, Blackburn Rovers and West Ham United, just to name a few. His biggest achievement was winning the 2004 Uefa Champions League with Jose Mourinho at FC Porto, before retiring after winning the league title with Orlando Pirates.

After referee Thando Ndzandzeka blew his whistle to signal the end of the heated tie, where both teams got red cards, McCarthy was on his way to confront Tembo but his goalkeeper coach Josephs, thankfully, was there to stop him. This just amplifies what we’ve always known about Benni, even during his playing days – a no nonsense character who never backs down from a fight. Perhaps it’s passion or arrogance, but it always catches the attention. We look at a few occasions where McCarthy needed some taming, or else all hell would’ve broken loose.

If it was a fight, Mokwena wouldn’t stand a chance

Let’s start in 2019 when McCarthy told then Pirates coach Rulani Mokwena that he would never come out tops if he were to get into a fist fight with him. It started when City were 2-0 up and Bucs had to play catch-up, and indeed the Buccaneers caught up with McCarthy’s team and led 3-2. The tables were turned and Benni was livid on the touchline. He accused Mokwena of delaying tactics, saying he would stray the ball away from City players whenever it went into touch. McCarthy had none of it and surged into Pirates’ technical area. After the game, he said it was not a fight, but if it were: “If it’s a fight, he won’t come out on top… that I can assure you. He won’t come out.”

After the game, it’s me and you

A classic tale of how primary and high school pupils would have an altercation in class and make a pact to finish it off after school. In February 2019, a feisty affair between City and Maritzburg United was about to end in favour of City, who won 3-2. After a series of rough tackles, McCarthy blew his top and pushed a Maritzburg official, and told him they would finish off what they started in the tunnel. He stuck to his guns and confronted him after the game.

The day he ticked off Zinnbauer

McCarthy seems to like picking a fight against Pirates coaches. In May this year, he was ready to beat former Buccaneers head coach Jozef Zinnbauer, who for the first time, blew his gasket – but then again, what do you expect? There is almost no way one would remain calm if they are confronted by the provocative Benni. He just does not hold back. This commotion on the touchline was instigated by a rough tackle on Vincent Pule, and Zinnbauer did not take kindly to it. While it was unclear what was said, the words were surely not kind and it took almost the entire staff on both benches to diffuse the situation.

A little bit of verbal diarrhea

Not only is the former Bafana Bafana striker always ready to turn the soccer pitch into a WWE or UFC ring, he never minces his words in the press room. Not so long ago, he boldly said Usuthu would do better than Kaizer Chiefs in the Caf Champions League, even though this is their maiden appearance in the continental showpiece. Amakhosi finished as runners-up against Al-Ahly, and going one better than Chiefs means winning it. AmaZulu did well to come back on Saturday and win 3-1 in Malawi to beat Nyasa Big Bullets on aggregate. But that was just the first qualifying round. There is still a long way to go for Benni and his team.