SuperSport keep up with Sundowns’ pace 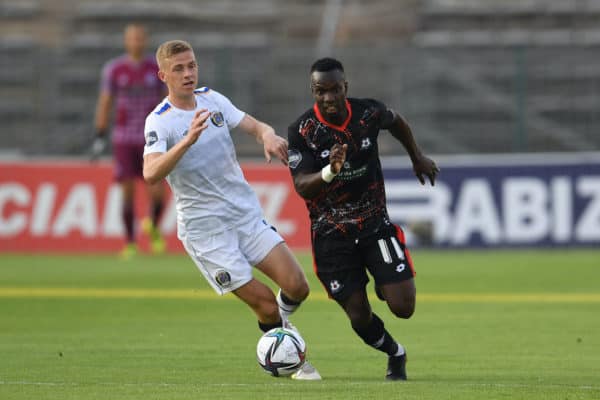 SuperSport United managed to keep the pace with their neighbours and defending champions Mamelodi Sundowns, as they beat Maritzburg United 2-1 on Saturday evening at the Lucas Moripe Stadium, to maintain their unbeaten run in the DStv Premiership.

Thamsanqa Gabuza made sure that the hosts went into the break with their noses in front when he headed home in the 10th minute from a Jamie Webber corner kick. SuperSport were always on the front foot and they continued where they left off as Teboho Mokoena found Gabuza with a delightful long ball, but the striker’s attempt was not as good as the pass as he fired wide of Marcel Engelhart’s goal.

Man-of-the-Match Thatoyaone Diltlhokwe got the winner with the final kick of the game when he scored an identical goal to that of Gabuza. He towered over Maritzburg’s defence to smash and grab the three points for United deep into stoppage time.

Before that, the man in the middle, Tshidiso Marupeng had to temporarily pause the game in the 55th minute when the floodlights decided to take a nap. The game resumed 10 minutes later and it was Lifa Hlongwane who found the equaliser three minutes after the game resumed.

Nothing much happened in the game after that until the 75th minute, when Mokoena teed up Iqraam Rayners with a through ball, but the former Stellenbosch attacker could not do justice to the mouthwatering pass as he ballooned his effort over the bar. SuperSport coach Kaitano Tembo reintroduced Sipho Mbule, who made his return from a shoulder injury that saw him miss the last two games.

In the 82nd minute, Gabuza had an opportunity to get his brace when the Team of Choice could not clear their lines and the ball fell in to his path, but he did not respond quickly, and as a result, Engelhart was able to recover and extinguish the danger.

Immediately afterwards, Maritzburg launched a counter attack led by Amadou Soukoua but thanks to Diltlhokwe’s sharpness and quick thinking, he managed to get a foot in, and force the ball wide off Ronwen Williams’ goal.

And it was the same player who had the final say, giving SuperSport a massive three points.