Is Komphela in hot water after being sent off?

'We will find out from him and the club will deal with the matter if it needs to be dealt with,' said co-head coach Mokwena. 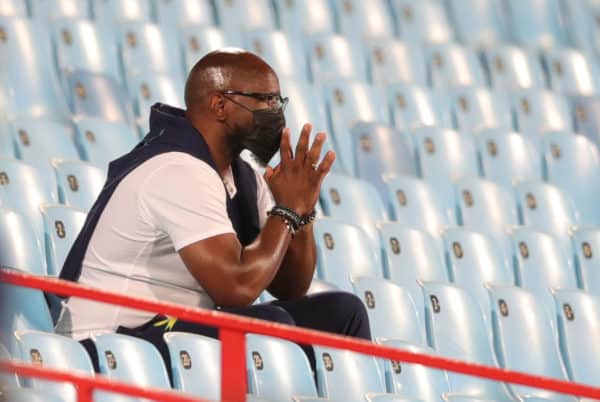 Mamelodi Sundowns senior coach, Steve Komphela did not have the best of days in the office on Sunday evening following his sending off as his side beat Swallows FC 3-0 at Loftus Versfeld. The mentor was sent off after receiving two yellow cards, however, it is not entirely clear what really happened as co-head coach Rulani Mokwena said he was also in the dark about the situation by the time he addressed members of the media in a post-match conference.

Komphela was given his first booking as he kept moving out of the technical area, and when referee Thando Ndzandzeka summoned him, Komphela supposedly refused to entertain the man-in-the-middle, who then flashed the second yellow and red card.

Mokwena has since revealed that Sundowns will “deal” with Komphela if need be, possibly much like players are allegedly fined for misconduct by the club – at least this is believed to have been the case under the Pitso Mosimane era, as Phakaaathi understands.

“I was on the opposite side of the bench at that moment so I am not so sure what happened and it becomes very difficult to conclude and share my feelings without knowing what happened. We will find out from him and the club will deal with the matter if it needs to be dealt with,” said Mokwena.

“This is football and we all wear our hearts on our sleeves and we know how passionate coach Steve is and how much he loves this club and he is prepared to fight for every situation. I don’t see anything wrong with that,” he added.

The Downs mentor went on to express how much he misses seeing supporters in the stadium, saying he “SBWLs” the presence of the Minwana Phezulu nation. SBWL is a modern term derived from IsiXhosa word sabaweli, loosely translated to ‘craving’.

“All of us want to get our fans back within the stadiums but the most important thing is to find the safest situation for everybody. We are still in the middle of the pandemic and we haven’t ridden this wave out.

“When you watch the Uefa Champions League and other leagues , you get the sense that supporters have missed the game and because they missed the game, the attendance has increased and the support that they give their teams is something that we marvel at and we SBWL.

“It is something that we are really hoping for but as soon as it is safe for everybody to come to the stadiums and we find the right protocol and the conditions allow for that and we hope that the people who are in charge of that will make the right decisions. We are just patiently waiting for them to guide us,” said Mokwena.