'We will fight until we die, then we will see,' said the Bafana head coach. 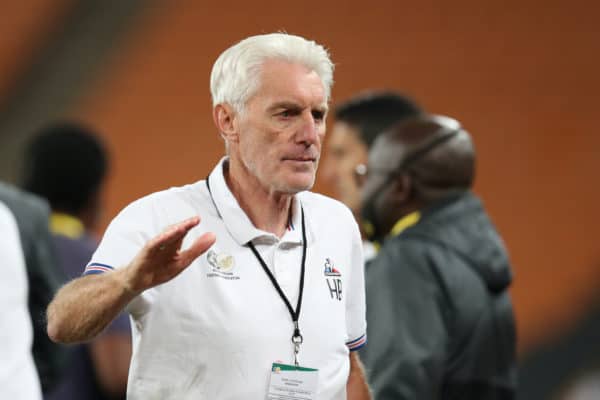 Hugo Broos says his side will give Ghana a proper battle if it comes down to the final qualifier. Picture: Gavin Barker/BackpagePix.

Hugo Broos has promised his Bafana Bafana side will fight Ghana tooth and nail for top spot in Group G, if it all comes down, as now looks likely, to next month’s Fifa World Cup qualifier in Ghana.

ALSO READ: Bafana edge out Ethiopia to stay ahead of Ghana in World Cup race

Bafana met Broos’ target of six points from six in a 3-1 win in Ethiopia on Saturday, followed by Tuesday’s 1-0 victory over the same opponent at FNB Stadium.

There was no help, however, from Zimbabwe, who lost twice to Ghana, 3-1 aways and 1-0 at home, leaving South Africa still just a point clear of the Black Stars at the top of the group. Only the winner of Group G will make it into the final round of qualifying for Qatar 2022.

A victory for Bafana at home to Zimbabwe, who have had a disappointing campaign, and a win for Ghana in Ethiopia will keep the status quo heading into the final group match.

“If the situation is what it is now, and we go to Ghana one point ahead, Ghana will have to win the game, they will have no other solution,” said Broos, after a Getaneh Kebede own goal had secured his team a tense three points on Tuesday.

“So maybe we can do something there. With the match against Sudan in mind from some months ago, that can never happen any more. We will fight until we die, then we will see. But first we have Zimbabwe, let’s think about that (first).”

If Bafana beat Zimbabwe and Ethiopia can take down Ghana, of course, South Africa will have already won Group G before the Ghana game, a dream scenario.

“I hope my colleague can give me a present next month by beating Ghana!” quipped Broos, with Ethiopia head coach Wubetu Abate seated next to him.

The Sudan game Broos is referencing came under previous Bafana head coach Molefi Ntseki, when Bafana, needing only a draw to qualify for the next Africa Cup of Nations. conceded early goals and lost 2-0 in Sudan.

Broos identified the need to avoid such calamities in his first press conference as Bafana coach, and just one goal conceded in four Group G qualifiers is testament to far better defensive organisation in this Bafana side.

In both games against Ethiopia, Bafana were heavily reliant on a strong defence, from goalkeeper Ronwen Williams, who made two outstanding saves to keep the scores level in Bahir Dar, to the whole back five on Tuesday, who had to stave off a spirited Ethiopia display, as Bafana won despite not playing particularly well.

“As clean sheet is very important, it means before you start a game you already have a point, and if you score you win the game, like today,” added Broos.

“In Ethiopia, we could count on Ronwen, who had to make two fantastic saves, or we were not in the game any more, but he did it.

“And today, the defence was good, they stood where they had to be and didn’t give (Ethiopia) so many chances. They had some dangerous situations, but not so many chances.”