Mosimane has come under pressure in Egypt. 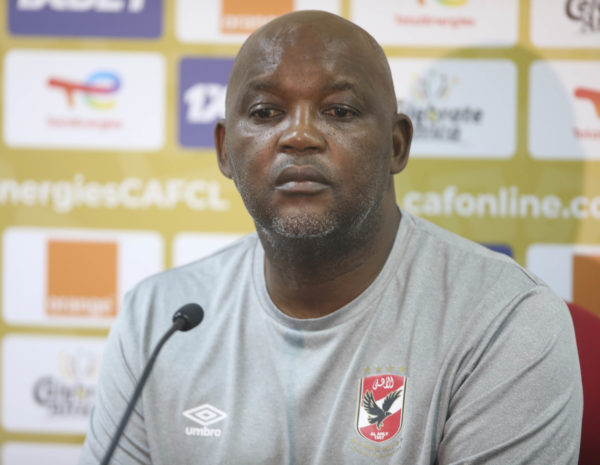 Al Ahly coach Pitso Mosimane is sad to be heartbroken by the media criticism and public attack against him. (Fareed Kotb/BackpagePix)

Former Al Ahly goalkeeper Ahmed Shobier has revealed that Pitso Mosimane is saddened by the recent criticism from the media and public attack against him.

Shobier claims that this is part of the reason why contract extension talks between Mosimane were postponed until the end of the season.

Despite winning back-to-back Caf Champions League, the Caf Super Cup in a short space of time, Mosimane has come under pressure after failing to win the Egyptian Premier League and losing the Egyptian Super Cup to Tala’a El-Gaish.

This has saddened Mosimane, according to Shobier.

“Mosimane explained to me that he preferred to postpone negotiations with the club until the end of the season and there was no problem,” Shobier said on his show on ONTime Sport as reported by Kingfut.

“I spoke with Mosimane during the El-Khatib conference yesterday, and he told me that everything that was reported about his desire to increase his salary isn’t true.

“Mosimane told me that he was sad because of the media and public attack against him in the recent period, and that his heart was broken because of the criticism and talk about his desire to increase his salary, despite his achievements with Al Ahly.

“Mosimane told me that Al Ahly had not won the African Champions League for years, and that he was able to win the title twice in a row after a long absence, then play in the Club World Cup and win the Egyptian and African Super Cups.

“Mosimane confirmed that he respects everyone and there is no reason to criticize him and hopes that everyone will still have faith in him. He loves Al Ahly since even when he was in South Africa.

“He told me that losing the league was out of his hands, especially in light of the large number of matches and the pressure. Also the fact that many players joined the Egyptian national team for the Olympics,” concluded Shobier.