Gabuza is quite a comical character. 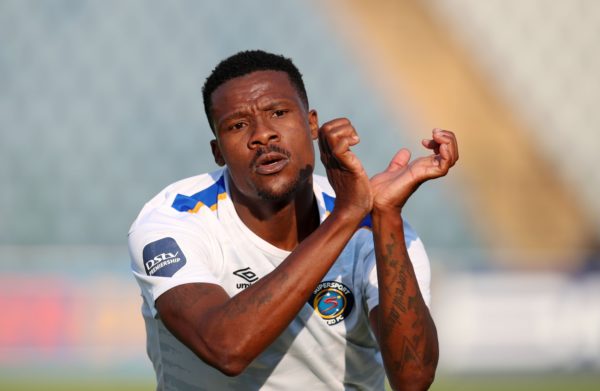 The invention of social media might have some negative effects on the beautiful game but at the same time it gives fans an opportunity to zoom into the personalities of players off the pitch.

One player who has been on the spotlight – not only for his brilliant displays lately – is Thamsanqa Gabuza, whose videos have been all over the internet and giving fans a view of different sides of the SuperSport United striker.

Gabuza is quite a comical character and you would be lacking some sense of humour if you were to spend an hour around him and not laugh even once. Actually, he does not hide his humorous side and this is testament with his new celebration every time he scores a goal.

He probably got tired of running to the corner flag and waiting for his teammates to join him after he rattled the net.

This season Gabuza would not allow Peter Shalulile to outshine him with his very elaborate kangaroo-like hop whenever he jests off in celebration, as Gabuza took inspiration from the trendy Amapiano song titled Bopha by DJ Maphorisa, real name Themba Sekowe.

The former Orlando Pirates is among the top goal scorers in the DStv Premiership with five goals and only a few have received more Man-of-the-Match awards this season. After he helped The Spartans beat TS Galaxy 2-1 this past weekend and in the final moments of coach Kaitano Tembo’s post-match remarks in the dressing room, he made a special mention to Gabuza, who responded in the most comical way, asking his coach if he could be excused from training for a while since he gets the jobs done on the pitch.

Gabuza somehow thinks he can sing and he does not – like most of us – leave the singing at the shower, he would always lead songs in the dressing at Pirates and he still does the same at Matsatsantsa A Pitori. Have a look at his version of John Legend’s All For Me song and be the judge about his vocal abilities. Whether you agree that he is quite vocally wounded or not, one thing we can agree on is that the 34-year-old is maturing into a fine forward and his comical side proves that he is a larger than life character.