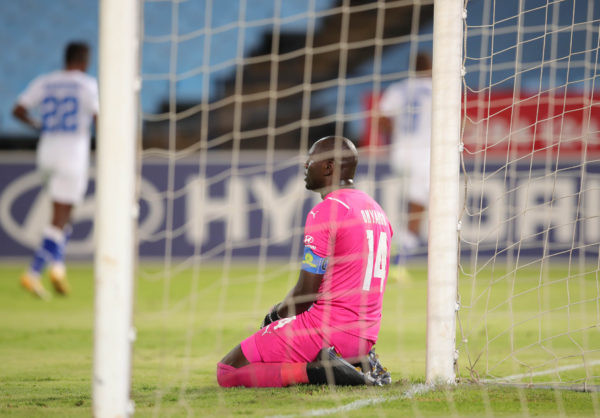 Denis Onyango reacts after failing to stop a free kick from Teboho Mokoena during the DStv Premiership 2021/22 match between Mamelodi Sundowns and SuperSport United at Loftus Versfeld Stadium, Pretoria on Wednesday. (Samuel Shivambu/BackpagePix)

For all the years that Denis Onyango has been the number one goalkeeper at Mamelodi Sundowns, former head coach Pitso Mosimane would say he budgeted for goalkeeping errors every season, and for the current coaching leadership at Masandawana are also leaning on the same thought pattern following two grave mistakes made by the veteran goalkeeper on Wednesday evening.

Onyango’s errors led to two SuperSport United goals as the Tshwane derby played out to a two-all draw at Loftus Versfeld Stadium on Wednesday.

Sundowns co-head coach Rulani Mokwena could have lashed out at Onyango, instead, he came to his player’s defence.

“Unfortunately when you are a goalkeeper, your mistakes may be more costly than infield players but the reality is that Denis is a top goalkeeper. Mistakes are part of the game and he has our support. We will analyze the game and make corrections as we do even when we win because we always try to improve,” said Mokwena.

“I know that the state of football says when you make mistakes you become the scapegoat and we have to refrain from that. How many other times has he helped us? We have been talking about the clean sheets and the records that we have been setting – all of it had to do with Denis, so let’s not be quick to forget. Let’s appreciate and love our players and appreciate their good and bad efforts,” he added.

The two goals scored by Matsatsantsa A Pitori were the first that the defending champions conceded this season in the DStv Premiership, having gone 10 without conceding a goal.

United had to fight back from two goals down, becoming only the third side to deny the Brazilians all three points and Mokwena had nothing but a bag of praises for his crosstown rivals.

“Congratulations to SuperSport and Kaitano Tembo for staying in the game and earning a point. We cannot fault our players for trying, they ran hard and gave a good account of themselves but unfortunately it was not meant to be.”