Mngqithi is expecting a tough counter against Stellies tonight. 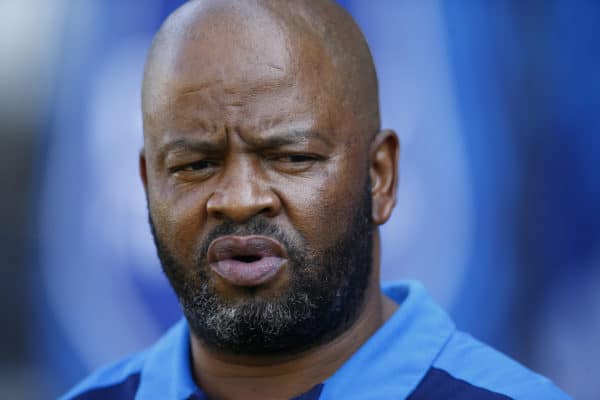 Mamelodi Sundowns co-coach Manqoba Mngqithi is expecting a difficult encounter against Stellenbosch FC whom they meet at the Danie Craven Stadium on Saturday night.

ALSO READ: Have Sundowns been hit by new Covid variant?

Sundowns come into this game at the back of a morale boosting 2-0 win over Sekhukhune United, while Stellenbosch are licking their wounds, having lost 1-0 to Royal AM in their last league match.

Mngqithi is expecting a tough counter against Stellies tonight.

“It’s a very difficult team to break down, though in build up they look like they play with two center backs – which was [Sibusiso] Mthethwa and [Alan] Robertson, or Mthethwa and Robyn Johannes, then you also have [Zitha] Macheke who starts more as a 6 in attack, but in defense you already have him as one of the three center backs, that makes them have three center backs and two wing backs, and two midfielders in front of Macheke. On top of that they have got three players and against us we know, the speed is what they will always be looking for,” said Mngqithi.

“They have [Ashley] Du preez, [Stanley] Dimgba, [Leandro] Mendieta, and those players will cause us a lot of problems. We know [them] very well [because] even in the last match that we played against them in Stellenbosch they gave us a very good run for our money, but at the end of the day we managed to conquer.”

The month of December will see Sundowns play seven games and Mngqithi says the defending champions will not do much training instead they will focus on matches and video analysis.

“The games that are coming are not giving us a chance to prepare at all, because after Stellenbosch there is one day of traveling and then after that you are already on match day -1 for the next match. Training is now going to be more on matches and video analysis, we will not have as much time to spend on the field. The truth of the matter is [that] any coach at this stage of the season who thinks they might have enough time to train the team might find themselves having alot of problems because the games are going to be coming in thick and fast,” concluded Mngqithi.