'We are not going to take it easy even though we know that we have qualified for the quarterfinals,' said Refiloe Jane. 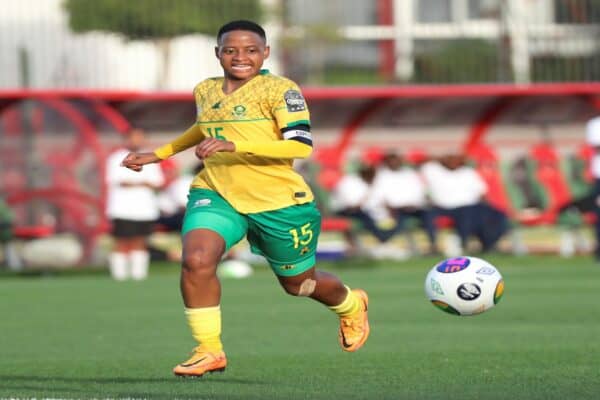 It is all about keeping the winning momentum going for Banyana Banyana, says skipper Refiloe Jane as the team head into their final Group C clash against Botswana in the Women’s Africa Cup of Nations (WAFCON) in Morocco on Sunday.

Banyana have already booked their spot in the quarterfinals of the WAFCON, with the team having secured six points in their opening two games, placing them at the top of their group.

ALSO READ: Moriri expecting a ‘humdinger’ against Pirates in the Diski Shield

Jane reckons the important thing is to carry the same momentum, which is to win each and every game, in their bid to go all the way to the final and win the tournament for the first time.

“We don’t have to take it easy, we have to keep the momentum of winning going,” said the Banyana skipper, whose exceptional performance in their last game against Burundi saw her win the Player-of-the-Match award.

“It is important to have that feeling or eagerness to win every time you play when you are in a tournament. So, for us, we are not going to take easy even though we know that we have qualified for the quarter-finals,”

“Everyone is fighting hard in the team, from the first day of the camp to our second game in the competition. We know what is at stake and we are all on the same page in what we want to achieve as a team.”

Jane, who plays her football for AC Milan ladies, knows Banyana’s next opponents very well having faced them numerous times. She adds that their neighbours will come out blazing.

“We are expecting a tough challenge from Botswana. We know them, they know us because we have played so many times against each other. They need maximum points, so they will throw everything at us.”

With Banyana leading the group with six points, Nigeria and Botswana are level on three points sitting in second and third place respectively, while Burundi are last in the group without any points and they face the Super Falcons in their last game.