Desiree Ellis' charges make it to the 2023 World Cup and will play Zambia on Monday in the WAFCON semifinals. 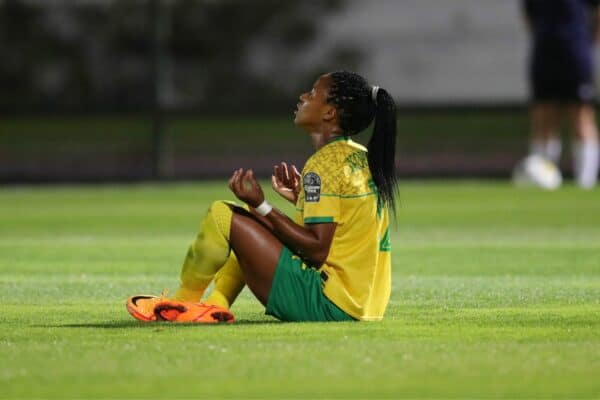 Jermaine Seoposenwe offers up a prayer after scoring against Tunisia. Picture: Samuel Shivambu/Backpagepix.

Banyana Banyana have qualified for the 2023 Women’s World Cup finals after beating Tunisia 1-0 in Rabat in the quarterfinals of the Women’s Africa Cup of Nations (WAFCON).

Desiree Ellis’ side will now play in a second consecutive finals, having competed in a Women’s World Cup for the first time in France in 2019.

Jermaine Seoposenwe got the only goal of the game, bursting clear of the Tunisia defence in the 13th minute and slotting the ball into the net for her second goal of the tournament, having also scored in the opening match against Nigeria.

Banyana had other chances to score, especially when Noxolo Cesane fired over in the second half, but Tunisia threatened little themselves and in the end, they were able to celebrate as they sealed their passage to Australia and New Zealand in 2023.

Banyana, five time WAFCON runners up, can now focus on trying to win the competition for the first time. They will play Southern African rivals Zambia in the semifinals on Monday and if they come through that, will take on Nigeria or Morocco in the final on July 23.