I feel like I have lost a little brother – Andile Cele 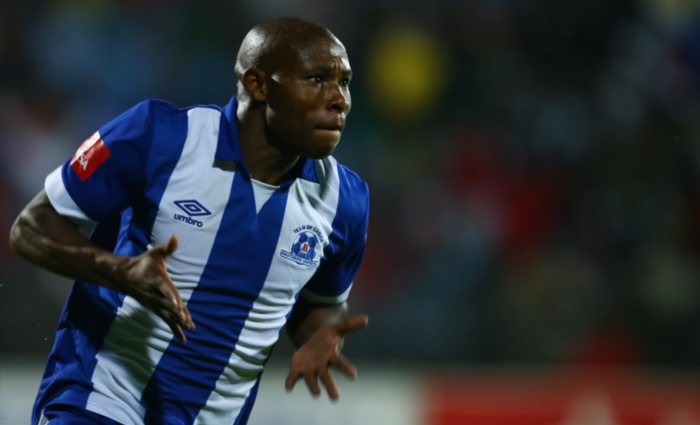 Mondli Cele of Maritzburg Utd after his goal during the Absa Premiership match between Maritzburg United and Orlando Pirates at Harry Gwala Stadium on January 16, 2016 in Pietermaritzburg, South Africa. (Photo by Steve Haag/Gallo Images)

“We are staunch Pirates supporters at home. So when Mondli scored, we were happy but at the same time could not celebrate his goal because it was against our team,” Cele said yesterday. Mondli’s signing at Maritzburg had made Andile happy because he thought someone would represent the family name even though they were not related.

“When I told my mother about him signing for Maritzburg, she commented that at least we now had someone carrying our surname forward. “I had met him when he was at Gamalakhe United and I had started coaching Maritzburg City. His coach introduced us and said to me ‘this is the guy that will continue the Cele legacy in football’. From then we kept in contact, especially after he joined my hometown team,” said Andile.

He said they were getting closer when Mondli died: “He was recently out of the team with an injury, and we kept in constant contact. He would phone me for advice, and I told him injuries are challenges that every player goes through and he should be strong.

“Just last Tuesday, he came to our training session and told me he wanted to train with us because he felt he was behind in terms of his fitness. We had a good session and my players were happy to have a Premiership player among them,” added Andile.

“After the session, he stayed behind with a few guys to do scoring drills and he was looking forward to the Pirates game, saying he wanted to score. That is why I was so proud when he did so.”

Andile was looking forward to phoning Mondli on Sunday to congratulate him and encourage him to keep working hard when he got the call he had died. “A guy that works at a local radio station called me early on Sunday and told me Mondli had died,” said Andile.

“At first I thought he was joking and just called to have my analysis on the radio as always. But he insisted and I couldn’t believe it. I felt cold inside, I felt my stomach going into a knot… Anyway, may he rest in peace. He was a great guy and headed for greater things. I feel like I have lost a little brother.”

Messages of condolences have been pouring in for both Cele and Maritzburg since the news of his death broke. Mondli was allegedly driving home from a night out with friends when he lost control of his car and it crashed into abridge and landed in the Msunduzi River, just below where the Dusi Canoe Marathon starts. He died at the scene.

He was with three female companions at the time, and one of them, Delisiwe Ngwenya – a football journalist with SABC Radio Station Ukhozi FM – also died. Mondli’s death comes just a few months after another PSL player, Cecil Lolo, died in a car accident in Cape Town.

Mondli was born on March 19, 1989 in Umkomaas on the KwaZulu-Natal south coast, but grew up in Folweni, outside Durban. Like many rural young boys, football was his only form of entertainment. After playing for various local teams, he got his big break when he joined Gamalakhe United who were playing in the KZN Vodacom League.

His impressive displays caught the attention of Mandla Ncikazi who was assistant coach at Maritzburg at the time. He joined The Team of Choice in August 2014, scoring four goals in his first season in the top flight. This season he had played eight games and scored two goals – one against SuperSport United just over a week ago and the other against Pirates on Saturday.

The funeral will be held at his parents’ birthplace in Umkomaas on Saturday.