Orlando Pirates are ready to tackle the team of the moment Mamelodi Sundowns. 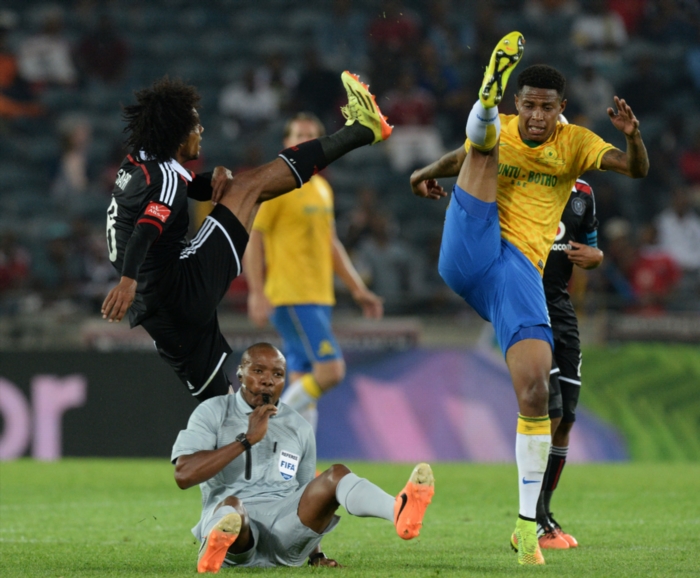 Referee gets sumped by Issa Sarr of Pirates and Bongani Zungu of Sundowns during the Absa Premiership match between Orlando Pirates and Mamelodi Sundowns at Orlando Stadium on December 10, 2014 in Soweto, South Africa. (Photo by Duif du Toit/Gallo Images)

If Orlando Pirates coach Eric Tinkler had a choice of opponents for his team right now, Mamelodi Sundowns would most likely not be on his list.

Tinkler’s team are just coming together, having managed to avoid defeat in their last three games for the first time this season, while Sundowns are on an unbelievable run that has seen the Tshwane side unbeaten in 13 matches.

But a motivating factor for Tinkler ahead of tonight’s Absa Premiership clash against Pitso Mosimane’s team is that if they manage an unlikely win, it would be a huge confidence-booster.

While the odds are obviously stacked against Pirates, Sundowns midfielder Hlompho Kekana said that should not be the driving factor in their approach.

Kekana said he is confident they can beat Pirates, but is also aware of the threat posed by the Soweto giants on a good day.

“We are hoping to continue the good run of form we have been enjoying thus far in the league,” said Kekana yesterday.

“We take every match as it comes and prepare accordingly, but our recipe is the same for every match. We take into account what the opposition can do, but do what we do best because that’s what we have control over.”

Sundowns look on course to win a record seventh Premiership title and a second under Mosimane’s guidance. Kekana revealed that playing Pirates is a motivation in itself as they always have a score to settle.

“Another motivating factor for us is that we have enjoyed some good results at Orlando Stadium before, but don’t get me wrong because everyone knows what Pirates can do on a good day.

“Their pace and movement off the ball will need to be closely monitored,” said Kekana, who scored a goal-of-the-season contender at the same venue three seasons ago.