According an insider, players now have clear favourites, which is killing the team spirit. 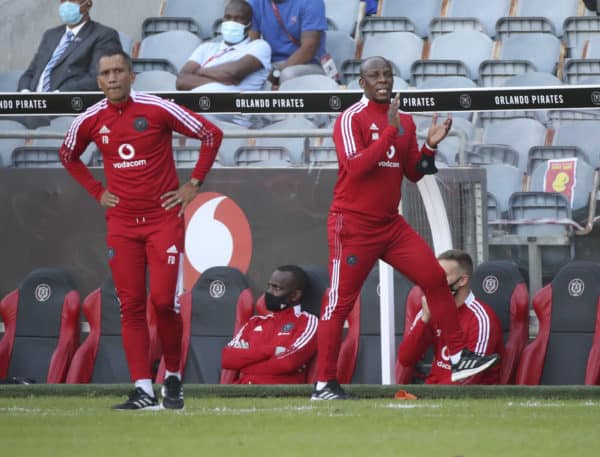 Fadlu Davids and Mandla Ncikazi, assistant coaches of Orlando Pirates. Pirates players are said to be divided as to who should be given the head coach job (Gavin Barker/BackpagePix)

The joint-coaching situation at Orlando Pirates has split the players into groups, with some players feeling Fadlu Davids has to be the head coach, while others believe Mandla Ncikazi is the perfect fit for the job, a source has claimed.

ALSO READ: Royal AM may lose out on former Pirates coach Krol

Pirates have not made it public as to who the head coach actually is – Davids or Ncikazi, who has been fully in charge of the team since the departure of Josef Zinnbauer.

The German coach announced his resignation after Pirates got booted out of the MTN8 by Swallows FC.

According to the insider, players now have clear favourites, which is killing the team spirit. This thing is said to have even been noticed by new players, who find themselves stuck in the middle.

“People are not happy with what is happening in that squad, it’s a very talented squad but there is no unity. There are sub-groups inside the club with some players only wanting to take instructions from Fadlu, while others are on coach Mandla’s side.

“You see, that’s where the problem starts, there is no head coach, there is no-one who is in charge of everything. Even Lorch (Thembinkosi) spoke about the team being divided in that show on TV (Sitting with Stan). If you don’t get along with a certain player, you don’t pass the ball to him, unless you’re under pressure. That’s what happens – you should look at the way the team plays, it is wrong for a big club like Pirates. I don’t know how it is going to be fixed, but it better be soon,” said the source.

Meanwhile, a former staffer at Orlando Pirates has revealed that the reason things are always going pear-shaped at the Soweto side is because of meddling backroom staffers.

He said there are four individuals at Pirates who have been given too much power and they are using it to influence even coaching decisions.