OPINION: Pitso’s words are prophetic as Sundowns slide out of Champions League

'The trophy, put it on the table, then we'll talk,' said Mosimane, and Sundowns could not. 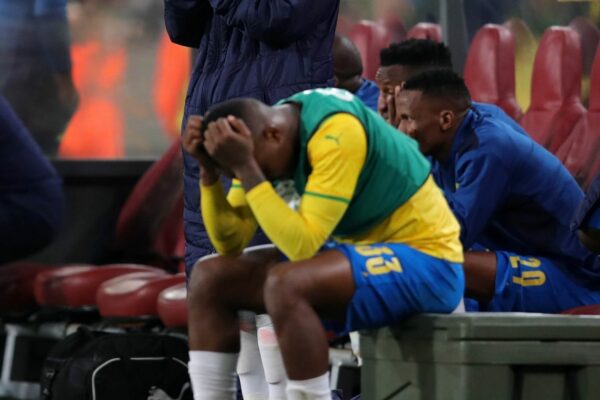 A dejected Neo Maema puts his head in his hands after Sundowns are knocked out of the Champions League. Picture: Samuel Shivambu/Backpagepix.

Al Ahly head coach Pitso Mosimane probably put it best, after his team had lost for a second time to Mamelodi Sundowns in the group stages of this season’s Caf Champions League.

ALSO READ: ‘We cried,’ says Mngqithi, as Sundowns bow out

“If you (Sundowns) don’t win it, it is the Paris Saint-Germain story again. You can win the group, you’re good, but the trophy, put it on the table, then we talk,” said ‘Jingles’.

As we sit on Monday, prophetically, it is Al Ahly who are in the semifinals of the Caf Champions League, going for a third title in a row, while Sundowns are reeling from being stunned by Petro Atletico in the quarterfinals.

As inspired as Masandawana were in the group stages, when it came to the knockout stages, they imploded, while Ahly and Mosimane showed all the grit of experienced champions to find a way past Raja Casablanca.

The Brazilians could perhaps feel aggrieved by the late ‘goal’ from Neo Maema in the first leg, disallowed after consultation with the Video Assistant Referee, who picked up a potential foul by Mothobi Mvala earlier in the move.

But VAR actually helped them in the second leg, as it led to a disallowed Petro effort when they were 1-0 down at FNB Stadium, the referee ruling that Denis Onyango had been impeded. VAR also intervened to give Petro their decisive penalty, but there was little debate around that ruling, and Sundowns, in any case, could only have themselves to blame.

Their campaign to get fans to FNB Stadium was a great success, with a sell-out crowd cheering the home side on. But on the field, Sundowns were jittery, perfectly illustrated by a Themba Zwane penalty that struck the post. So often Sundowns’ Mr Cool, Zwane stumbled when it mattered here.

So much like PSG, who collapsed against Real Madrid in this season’s last 16 of the Uefa Champions League, Sundowns won’t have a trophy to put in front of Pitso. Instead, it is hard to bet against him lifting the Champions League yet again.