Roma inched closer to a place in the knockout stages of the Champions League on Wednesday thanks to a hard-fought 2-1 win over 10-man CSKA Moscow in the Luzhniki Stadium. 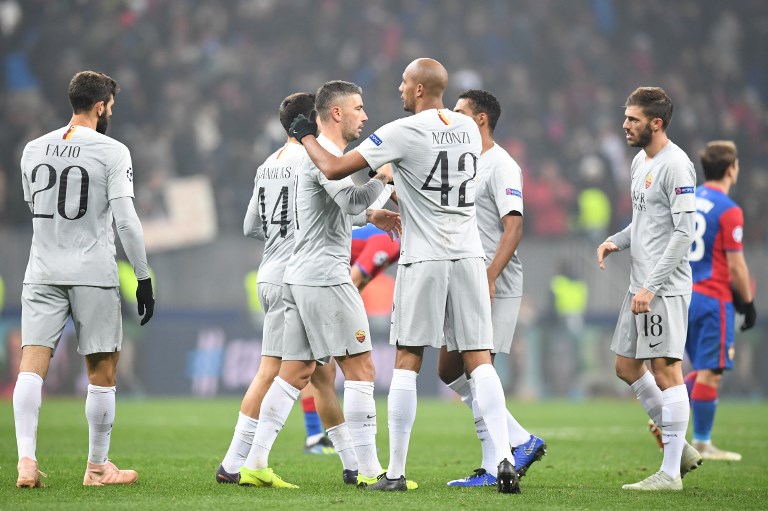 AS Roma players celebrate after the UEFA Champions League group G football match between PFC CSKA Moscow and AS Roma at the Luzhniki stadium in Moscow on November 7, 2018. (Photo by Yuri KADOBNOV / AFP)

An early Kostas Manolas header and Lorenzo Pellegrini’s neat finish just before the hour mark gave Roma a win that puts them three points clear of second-placed Real Madrid at the top of Group G ahead of the European champions’ clash with Viktoria Plzen later on Wednesday.

Iceland midfielder Arnor Sigurdsson had levelled for CSKA, but Hordur Magnusson’s 56th-minute sending off following a rash challenge on lively Roma winger Justin Kluivert allowed the wasteful away side to regroup and eventually take all three points.

“Of course Magnusson’s sending off helped us a lot but it was the result of the pressure that we put on CSKA,” said Roma manager Eusebio Di Francesco.

“I want my men to play more confidently as today we should have scored the third goal to avoid a nervous ending.”

Manolas got Roma off to a flying start when he glanced Pellegrini’s fourth-minute corner past CSKA goalkeeper Igor Akinfeev.

The hosts had a rare chance to score in the 26th minute when Slovenian midfielder Jaka Bijol met Nikola Vlasic’s corner but could only direct his header straight at Roma ‘keeper Robin Olsen.

Five minutes later Roma replied with a powerful free-kick by Aleksandar Kolarov, which forced Akinfeev to push the ball to Edin Dzeko, whose attempt on the rebound flashed over the crossbar.

However CSKA came out all guns blazing in the second half and Sigurdsson levelled five minutes after the break, expertly taking a fizzing Ilzat Akhmetov pass under pressure in the area and stroking the ball past Olsen’s outstretched hands.

The hosts had their tails up but were soon on the back foot again when Magnusson chopped down Kluivert as the Dutch youngster scampered down the field, leaving his team a man down with just 11 minutes of the second period played.

Pellegrini made them pay just three minutes later when he slipped an offside trap and poked past Akinfeev to help Roma to record three consecutive Champions League wins for the first time since the 2008-09 campaign.

Roma are now five points ahead of third-placed CSKA — who are staring elimination in the face with two games remaining — and can seal qualification against Real Madrid at the Stadio Olimpico later this month.

“I enjoyed Roma’s performance as they showed that they knew exactly what they needed to do to get the needed result. Hopefully, my men will learn the lesson.”