"For now, we can be honoured with the results we've got because you never know when the dream is going to end." 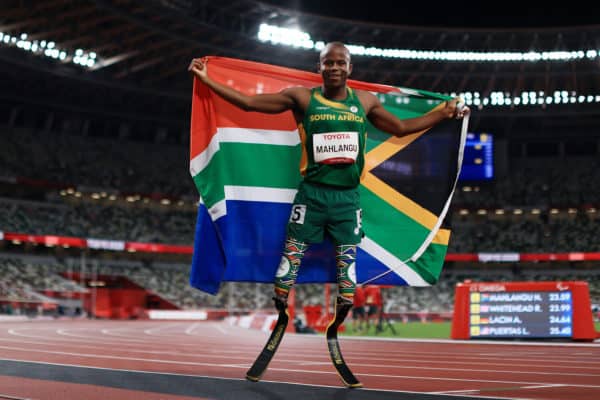 Already one of the fastest men at the Paralympic Games, teenager Ntando Mahlangu says he’s not looking too far ahead after securing double gold in Tokyo.

Having won the long jump in his class earlier in the week, Mahlangu added a second gold to his tally yesterday in the men’s T61 200m final.

The versatile double amputee completed the race in 23.59 seconds, well clear of British athlete Richard Whitehead, who finished second in 23.99.

“I’m very happy with two gold medals. I think that was the dream coming here, and the dream has come true,” Mahlangu said.

At the age of 19, he was already being tipped as a potential Paralympic legend, but Mahlangu said he first wanted to celebrate his Tokyo victories before turning his attention to future events.

“For now, we can be honoured with the results we’ve got because you never know when the dream is going to end, with a lot of factors coming in,” said Mahlangu, who had earned 200m silver at the 2016 Rio Games.

“So we have to embrace it right now and I’m not thinking about what’s going to happen next year.

“I just want to celebrate the hard work and dedication I’ve put in for the last five years. I think that’s the most important thing.”

In other events, Tebogo Mofokeng finished fourth in the men’s T62 400m final, with the 21-year-old athlete setting an African record of 50.09.

Meanwhile, in the swimming pool, Kat Swanepoel grabbed fourth spot in the S4 50m backstroke final in 50.17, missing the podium by 0.54.

Back on the track, sprinter Charl du Toit finished fourth in his T37 200m heat, booking his place in the final to be held on Saturday.

After 10 days of competition at the Tokyo Paralympics, the SA team were lying 28th in the overall standings with six medals (four gold, one silver and one bronze).