Women in sport: Talented Simmonds wants to kick on

A brilliant performer at youth level, one of South Africa's brightest tennis talents hopes to revive her career in 2018. 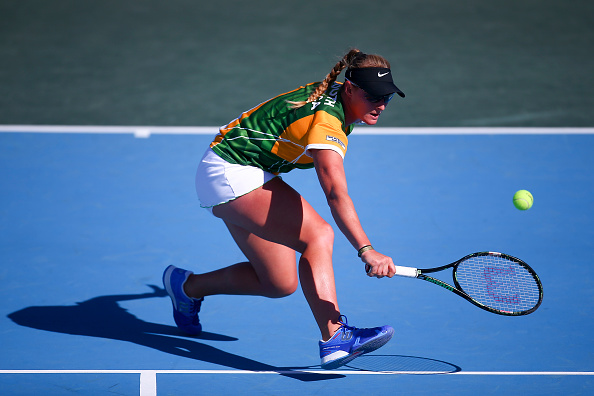 Chanel Simmonds of South Africa plays a backhand during her match against Heather Watson of Great Britain during the tie between South Africa and Great Britain on day two of the Fed Cup Europe/Africa Group One fixture at the Municipal Tennis Club on February 4, 2016 in Eilat, Israel. (Photo by Jordan Mansfield/Getty Images for LTA)

Though she has not yet reached the tremendous potential she displayed as a junior, Chanel Simmonds is confident she can climb the ladder this year, as she continues to lead the charge as South Africa’s top women’s tennis player.

Born in Kempton Park, Simmonds took up the sport at the age of nine, and by the time she reached high school she was already making waves on the elite domestic circuit.

Having attended Shangri-La Academy until grade nine, Simmonds decided to focus on tennis and opted to complete her matric via home schooling.

The move paid off.

By 2009 she had climbed to 14th place in the world junior rankings, and at the age of 17 she won her first title on the International Tennis Federation (ITF) tour at a lower-tier tournament in Pretoria.

After leaving the junior ranks, Simmonds went on to compete in the qualifying rounds at the Australian Open, French Open and Wimbledon tournaments, and she enjoyed a breakthrough in 2013 when she qualified for the main draw at a Grand Slam for the first time at the US Open in New York.

That same year, she also achieved her highest world ranking when she climbed to 158th position in the Women’s Tennis Association (WTA) list.

However, while Simmonds has gone on to win 19 singles and 23 doubles titles on the ITF tour in her career, she has since slipped to 490th place in the global rankings.

And though she believes she can regain her best form, Simmonds admits it’s difficult to sustain a professional tennis career from the southernmost tip of Africa, with the top-flight international circuit confined almost entirely to the northern hemisphere.

“It does make it hard because South Africa doesn’t really have any tournaments,” Simmonds said this week, as she prepared to leave for Italy to embark on her 2018 campaign.

“Over the last few years we’ve had some tournaments in Cape Town in December, but they’re really small and they don’t really help my ranking, so I’m forced to travel and it gets quite expensive.”

In 2017 she shifted her base, spending a large part of her season in the United States while competing on the local circuit and training at academies in Atlanta and South Carolina.

Simmonds admits, however, that she needs more support, and she hopes to have coach Earl Grainger with her on tour more often.

“I want to try come home a bit more often or have my coach come with me on some more trips because I’m alone most of the time when I travel to big tournaments,” she said.

While singles players Kevin Anderson and Lloyd Harris and doubles specialist Raven Klaasen are all among the top 100 in the men’s world tennis rankings, Simmonds is the only South African woman currently ranked among the top 500 in the global list.

The national Fed Cup team are also struggling, with Simmonds carrying a largely inexperienced squad, who were demoted to the bottom tier of the Euro-Africa division after struggling to put up a fight at the Group 2 tournament in Luxembourg last month.

Having recovered from injury, however, Simmonds is confident she can launch a comeback this season and lift the standard of the local women’s game.

“I ended the year with a hip injury, so I’ve been working on that, but I’m 100% healthy now. I’m just trying to gain some strength back, and spending a few hours a day on court just to sharpen up my game.”

At the age of 26, Simmonds believes she retains a bright future, and she is eager to prove it this year.

Aside from an attempt to rocket back up the world rankings, she also hopes to return to the podium at the African Games in Rabat in August, after securing the silver medal in the singles final and bronze in the doubles at the 2011 edition of the continental showpiece in Maputo.

“I definitely want to try and get back into the top 200 in the rankings so I can play in bigger tournaments and Grand Slam qualifiers,” she said.

“I’d also really like to participate at the African Games later this year, and try go for gold this time.”