The South Africans breathe a sigh of relief after a few chastening previous ties in the competition. 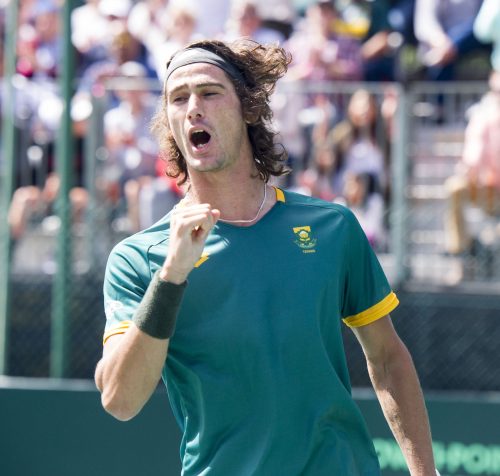 Lloyd Harris of South Africa celebrates his victory over Dimitar Kuzmanov of Bulgaria during day 2 of the 2019 Davis Cup tie between South Africa and Bulgaria at Kelvin Grove Tennis Club on September 14, 2019 in Cape Town, South Africa. (Photo by Peter Heeger/Gallo Images)

The local hero dominated the opening set but came unstuck early in the second, going down a double break.

But Harris showed grit and determination to fight his way back in the set, eventually forcing a tie-breaker which he comfortably won 7-3.

On what was a slow hard-court, both players struggle to hold serve with each claiming only two aces.

Harris lost his serve three times in the match but crucially capitalised on five of nine break points.

Harris said after his game he was greatly relieved that the team had achieved their target of winning the tie. South Africa had lost its last two home ties.

“It was tricky, but we succeeded in getting over the line,” said an emotional Harris. “Bulgaria played well and did a tremendous job. I drew great inspiration from the crowd, they were electric. At times, they gave me goosebumps. I felt their energy. As the game wore on, I felt more positive and felt the crowd’s energy.”

He continued: “There was breeze blowing and it made conditions a little different from yesterday. My serve went well, and I was happy with my play from both ends. Both of us were aggressive and there were times when could use my forehand to good effect.”

Earlier on Saturday, Raven Klaasen and Ruan Roelofse beat Gabriel Donev and Alexander Donski 6-3, 6-2 in the doubles to give the hosts a 2-1 lead.

In the final match of the day, rookies Phillip Henning (SA) and Gabriel Donev (Bulgaria) played the final reverse singles, a dead rubber. Henning won 6-2 6-3 for an eventual 4-1 tie victory for South Africa.