Victoria Falls: One of the true wonders of the world

No videos, pictures or words can come close to describing how majestic the falls actually are. For someone who lives “just around the corner” from one of the true Wonders of the World, for someone who has had the privilege of seeing many different parts of the world, I do wonder why it took me so long to finally get around to seeing the Victoria Falls.

It has been on my wish list for years … and I have looked at endless photos, and immersed myself in virtual tours as well as devoured reviews and articles.

But to stand there on the Zimbabwe side looking across to Zambia; to feel the spray from the thundering cataracts falling gently on you, to almost physically feel the roar which drowns out normal conversation – that is the wonder.

And, trust me, no videos, pictures or words can come close to describing how majestic the falls actually are. You simply have to experience them in person to fully appreciate their splendour.

Indeed, the legendary Scottish explorer, Dr David Livingstone, missionary, adventurer and the first European to set his eyes upon the falls as far back as 1855, was spot-on in his praise: “Scenes so lovely they must be gazed upon by angels in their flight.”

Already some 50 kilometres away en route to the Victoria Falls airport, the pilot pointed out the large white cloud of mist and spray towering 500 metres above the falls.  The raging water can also be heard kilometres away, hence the Kololo tribe living in the area in the 1800s aptly named it Mosioa-Tunya, “the smoke that thunders”. 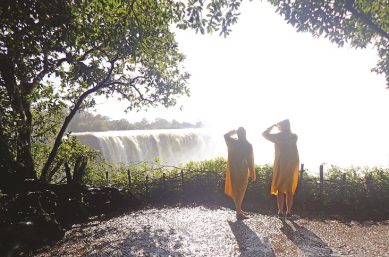 Getting a close-up view from a number of different viewpoints while walking along the trails overlooking the falls, one becomes intensely aware of nature’s force and might.

The nearly 2km wide Zambezi River racing in full force over the lip of a large basalt plateau and plunging into the gorge nearly 108 metres below, is truly a sight to behold! It boggles the mind to think that this mighty river has been running its course unabated for some two million years, steadily slicing through the rocks.

The walk starts at the western end where Livingstone’s statue overlooks the Devil’s Cataract. At this point, the water mass cascades at a frenetic pace on to the rocks some 60m below, setting the scene for what is to come.

Cataract Island is the first to break the line of the falls and is followed by the Main Falls. Here, the largest and widest sheet of water in the world plunges down more than one hundred metres over the rocky rim. To give you an idea: it is twice the height and one and a half times the width of the Niagara Falls.

Next follows Livingstone Island, the second island to stop the Zambezi in its tracks. Then in quick succession we get the Horseshoe Falls, the Rainbow Falls and finally the Eastern Cataract, each contributing in its own unique way to the overall impact of this magnificent spectacle. 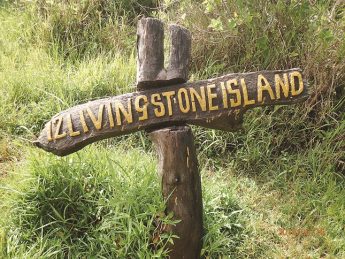 No wonder this Unesco world heritage site was also crowned one of the seven natural wonders of the world.

The volume of water carried by the Zambezi River varies greatly during the year, depending on the seasonal rains, which normally occur from late November until March. It is at its highest from the middle of March until about the middle of May, which was the time of our visit.

Just imagine: when in flood, the Zambezi pours up to 540 million cubic meters of water over the edge every single minute. As a result of the water vapour rising from the falls, it rains 24/7 – the only place on earth where it rains day and night.

In fact, at some places the rain pounds down so hard that it not only blurs your view of the falls, it completely drenches you.  So, be warned that a lightweight raincoat simply won’t do. Rather hire a sturdy raincoat from an informal supplier at one of the many stalls across the road to protect you and your (waterproof) camera from the rain.

What makes the walk along the falls even more magical is the fact the constant spray from the falls sustains a beautiful miniature rainforest ecosystem, which houses an array of trees, plants and exotic flowers as well as a large variety of animal and bird species. 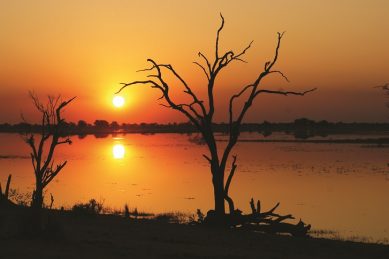 During our reconnaissance of the falls, a troupe of monkeys merrily escorted us from tree to tree, entertaining us to no end with their antics.

At the far eastern end, on the opposite side of the Eastern Cataract, one revels in the sight of the Victoria Falls Bridge. This impressive structure was a dreamcome-true for diamond magnate, politician and former Rhodesia founder, Cecil John Rhodes. Designed to be part of a Cape to Cairo railway, Rhodes envisaged passing trains “catching the spray of the falls”.

When the bridge was formally opened in 1905 – alas after Rhodes’s death – it was widely hailed as an unparalleled engineering feat rivalling the beauty of the falls themselves.

Those interested in its history can indulge in a tour that takes you through a century of Victorian engineering to the heart of Rhodes’ vision of a Cape-to-Cairo railway line while also enjoying some splendid views from walkways under the bridge.

Nowadays, however, daring bungee jumping, swings and slides from the bridge and white water rafting in the raging water down below seem to be the main drawcards, luring adrenalin junkies from far and wide. Watching these daredevils plunging head first into the gorge in one of the highest commercial bungee jumps in the world is spine-chilling.

A short 10-minute walk from the falls, the stately five-star Victoria Falls Hotel also offers a prime view of the bridge. This we properly savoured from the hotel veranda over a Zambezi beer and a glass of chilled wine. 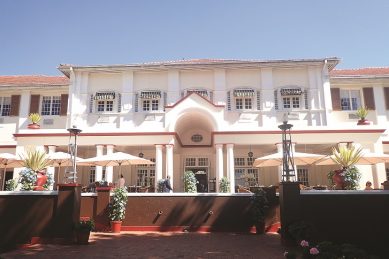 Built by the British in 1904, this “Grande Dame” – named after Queen Victoria of England – was originally conceived as accommodation for workers on the Cape-toCairo railway. Today it is a luxury icon and treasured landmark.

Adding to its splendour are serene lily ponds, manicured gardens and courtyards and imposing corridors and staircases housing a varied collection of historical photographs, images and other artefacts. The hotel was completely redecorated in 2013 to combine its traditional majesty with modern sophistication.

What strikes one most about this lively little village are the vibrant economic activity, resourcefulness and friendliness of its inhabitants. From the stalls of formally organised vendors opposite the entrance to the falls, or the many specialty arts-and-crafts shops and studios at the Elephant’s Walk Shopping and Artist Village, you can pick and choose from a wide selection of curios, jewellery, artworks, textiles or leather goods.

There is even a bunch of eager entrepreneurs in town, offering visitors outdated Zim dollars in the hope of making a buck! 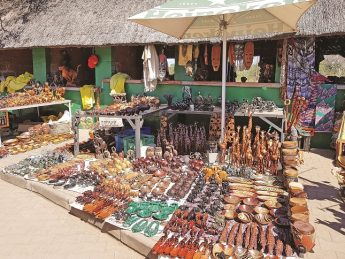 If you’re not in shopping mode, you can try out some locally produced craft beers or visit the herbal garden to learn more about medicinal herbs.

Clothing, electrical appliance and other stores are mostly basic, but the local OK is well stocked with everything you would need, should you, like us, stay at a selfcatering establishment. A shuttle service from our timeshare unit and back was most convenient.

Another compulsory outing is a sunset cruise on the mighty Zambezi. The longest east-flowing river in Africa and fourth longest after the Nile, Congo, and the Niger, it flows for an amazing 2 700 km through six countries before discharging its water into the Indian Ocean in Mozambique.