Mauritius: People-friendly paradise with lots to do and see

Mauritius has some of the most beautiful beaches in the world. However, its most precious feature is the people. 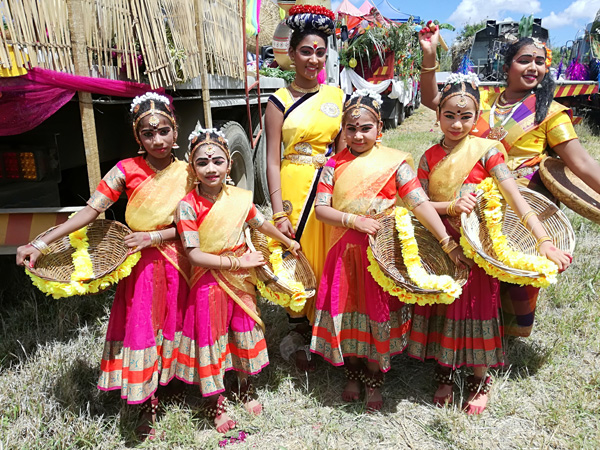 Standing in a long queue at the Sir Seewoosagur Ramgoolam International Airport in Mauritius – with two counters opened, holding my visa (which you get on arrival) and health declaration form – gave me a glimpse of how it feels to be a foreigner in another country and being at the mercy of the people you are visiting.

We were speculating with a fellow journalist on the kinds of questions the officials at the counter would ask us and what matching answers to give them, because we had both been invited by the Mauritian government – and we were not taking any chances.

Despite our paranoia that they might just throw us in jail for no reason, we were whisked through after a brief chat at the counter.

Outside health control, I was met by a tall Indian man, in a blue checked formal shirt and grey pants, holding a placard with my name on it: Miss Vhahangwele Nemakonde. But it was as if he knew me already when he saw me and gave me the biggest welcome smile.

“Hello! My name is Poteah Miz, but everyone calls me ‘Miz’.”

Miz had been working for Mauritius’ tourism team for 15 years. He was warm, open, and liked to joke. Like most people in Mauritius.

He ushered me to my ride, which would take at least an hour to get to the hotel.

On the drive, it was as if we were moving from Durban to Cape Town, with the high mountains and Engen and Shell garages on the way.

“Perhaps this island is just like South Africa,” I thought.

We got to the hotel after 10pm with no money (Mauritian rupees), or phones (no Mauritian SIM cards) on us.

Panic overtook us. How will we tell our families we arrived safely? Travel tip: try to book morning flights so you can arrive early in Mauritius and get your basics in order.

Also read: A 10-step beginner’s guide (from a true beginner) on travelling to Mauritius

The next morning, a short Indian man came to the hotel to take us to our first activity: Rum tasting at La Rhumerie de Chamarel. My first impression of the driver was that, unlike Miz, he was more reserved.

If only I knew this was the man who would later tell me he would pick me up at 7:30am when he would, in fact, only come at 9:30am. He was “punishing” me for being a “bad” child.

His name is Jean-noel Naiken and he was our driver and guide for the week.

Mauritius has some of the most beautiful beaches in the world. However, its most precious feature is the people. Even though in some instances we found ourselves being the only two black people in the room, we never felt the eyes on us. Everyone is friendly and warm and, to me, that was the best part about the island.

Also, greeting strangers in Mauritius is as common as it is in South Africa.

Though the official language is English, Mauritians mostly communicate in French and Creole, the native language. 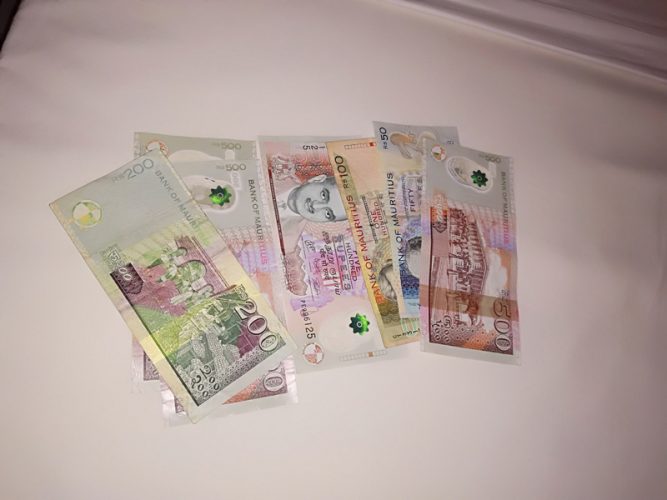 In my preparations for the trip, I got excited when I realised R1 000 is 2 469 Mauritian rupees. As if that was somehow a sign the rand can do more there. It can’t.

“I’ve spent 2 000 rupees on food in a single day,” he told this shocked South African.

He was right. Things in Mauritius are expensive. 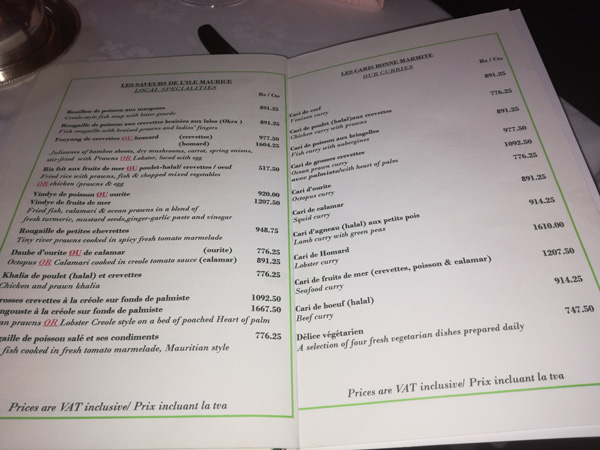 Even though you have more rupees to spend (compared to the rand), you’ll find yourself spending almost 1 000 rupees on a plate of good food in a normal restaurant.

So save up for the trip so you won’t have to cut back on the activities and the great food.

Mauritians eat fish. A lot of it. You will probably eat fish – different kinds – at pretty much most meals. If it’s not cooked and stewed, you will find it in a salad or as a meal on its own. 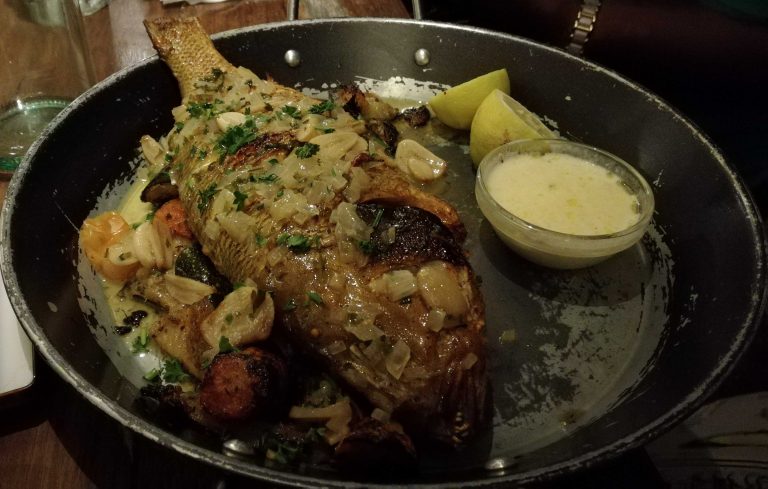 You will still find your chicken, lamb and beef, but fish is probably the most eaten protein on the island. While a normal South African mixed grill meal will include beef, chicken and boerewors, in the picture below, the triangular-looking item in the middle is fish. 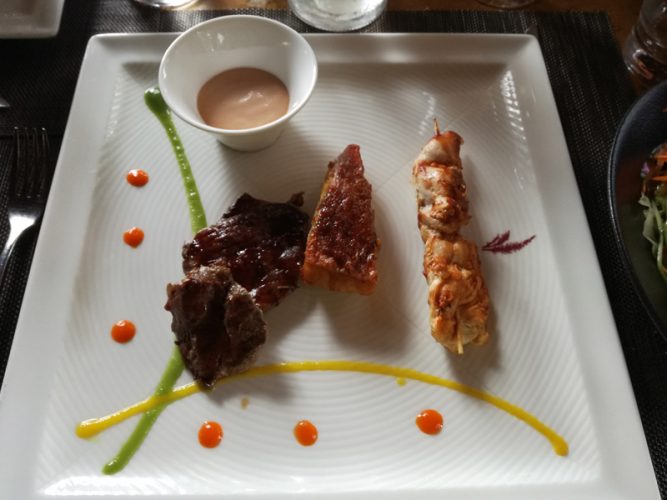 I also had the opportunity to taste Indian and Chinese traditional dishes in the city, which were most interesting.

The item below is a typical Mauritian-Indian breakfast: chilli bites. These are made of split peas and lentils soaked in water overnight, which are then crushed. Salt, coriander, spring onions and chillies are then added. Some will be hot, some not. They are usually eaten for breakfast with bread and butter. You get three of these tasty bites for 10 rupees. 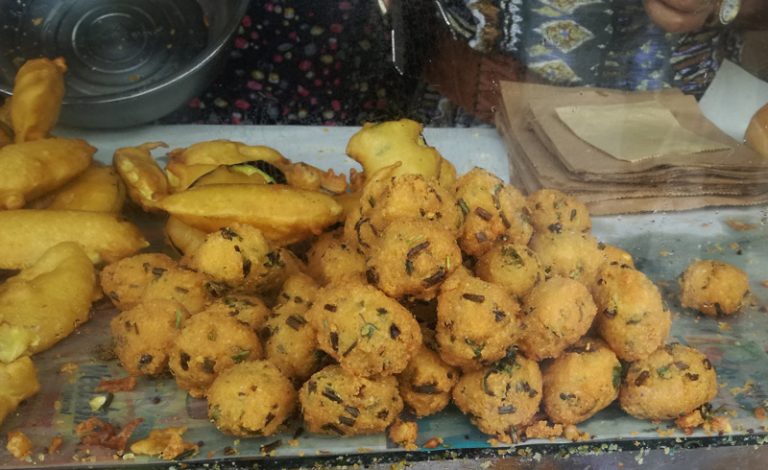 Mauritians drink tea all day long. They farm black tea and drink it with milk and sugar. In the old days, tea potters were common and people would get their tea from them. However, now companies hire tea ladies, while some make their own at home.

Also read: Why the Mauritian-Chinese are like no other people on Earth

This traditional Chinese dish is made of a vegetable called shushu. The green vegetable is between the potato and cabbage – it’s the size of a potato and looks like a cabbage. The only meat used is chicken. They rarely use pork and beef because most people don’t eat it. It’s mild and is used in most dishes for its texture. It includes steamed rice. 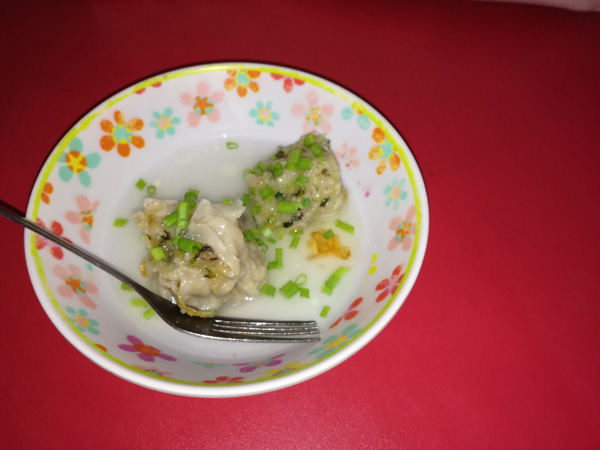 In China, the secret ingredient in these is red beets, but the Chinese in Mauritius don’t use the ingredient any more as it is not available on the island. They replace red beets with black lentils. All pastries have been given Mauritian names.

In the picture below:

Chinese Poutou (pronounced phuthu and tastes just like the South African one). Pink in colour, it is made of steamed rice flour and coconut.

Zinzli is made of sesame seeds, sweet potato, rice flour and black lentils. It is said to be the bestseller. This was my favourite too.

Gato Ledwa (which means fingers in Creole) is the only one that is not sweet. No sugar is used. It is made of wheat flour, which you make dough with and deep fry. It tastes like a salty doughnut. 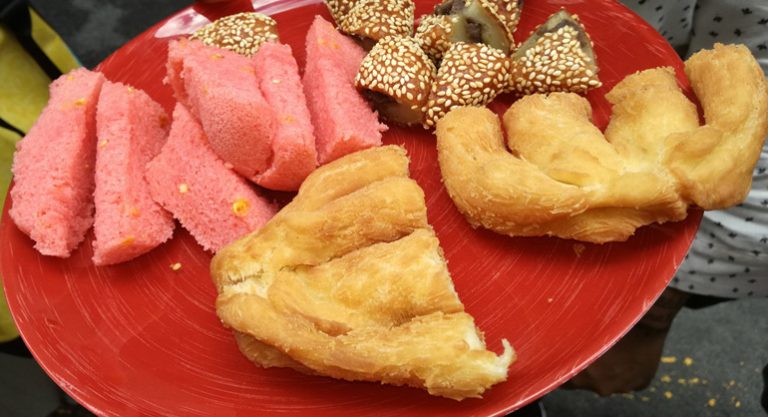 Situated on the north side of the island and close to the Pamplemousses Botanical Garden, is an old sugar factory that has been converted into a museum dedicated to 250 years of the history of sugar production in Mauritius. The name means “the adventure of sugar”. The museum is also good for children with question-and-answer games along the way. At the end of the tour, you’ll taste sugar and cane liquor (rum). 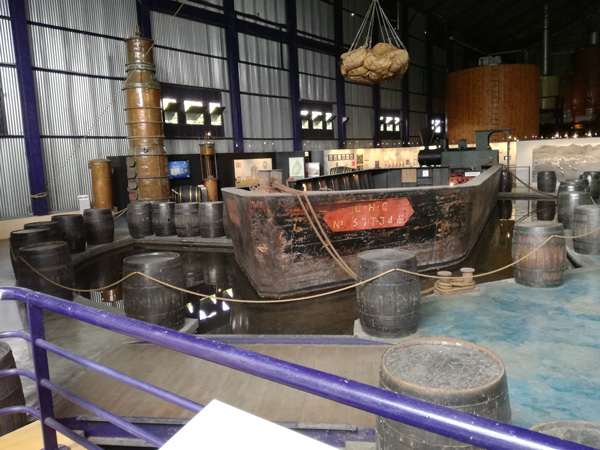 Rising to 555 metres above sea level on the southwestern coast of the island, this mountain has become a world symbol of freedom from slavery. It was a place of refuge for slaves who used to hide during colonial times. In the 1830s, it is said the slaves ran away from their colonial masters and used this mountain as a refuge. When slavery was finally abolished, the masters followed the slaves to the mountain in their ships “to inform them” of the new law. The slaves saw the ships, panicked and jumped to their deaths, the story goes. It is now a memorial site in honour of “the unknown slave”. 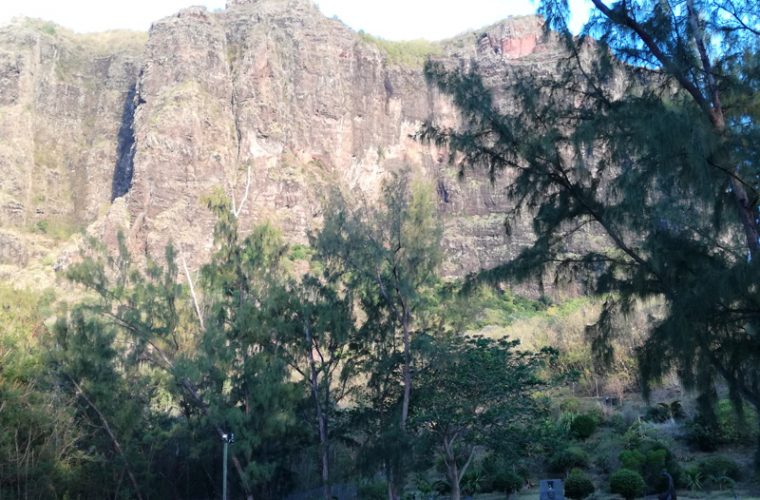 This is a museum situated at the heart of a natural park. It recollects geological history of the island, explaining how the island was formed. The “7 Couloured Earth” dunes reach up to 15m wide and contain traces of ancient activity of geoclimatic events. The basalt from the intermediate period lava flow has been leached by the hot and humid climate, leading to gullied clay. The decomposition has left on-site iron and aluminius oxides. Because these two repel each other, they gather spontaneously in colourful stripes, ranging from red to brown, blue and violet blue. Plants cannot grow on the dunes as they lack the necessary nutrients for growth. 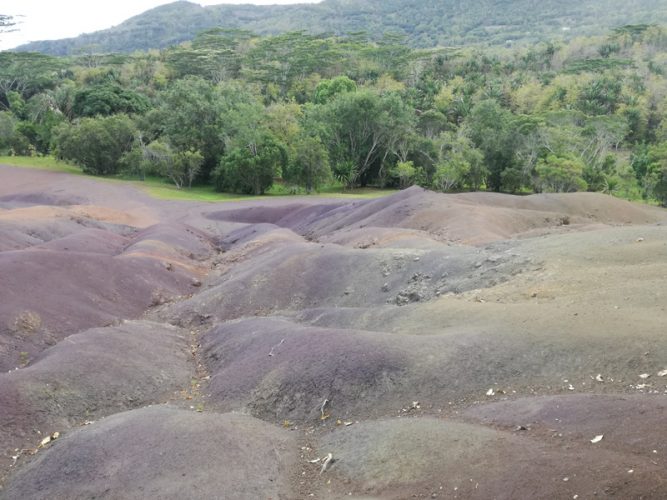 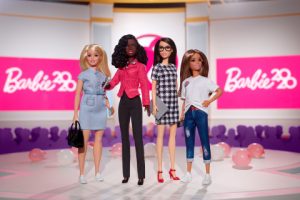 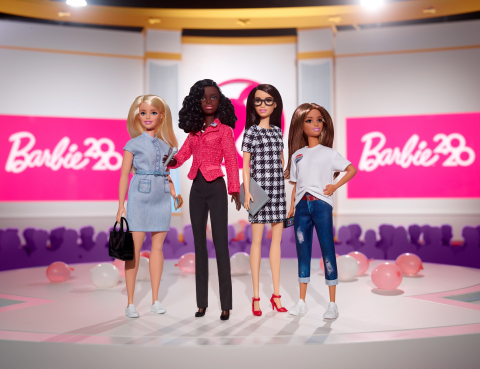 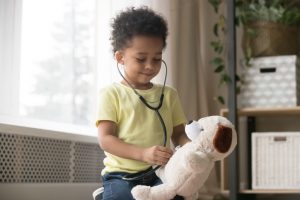 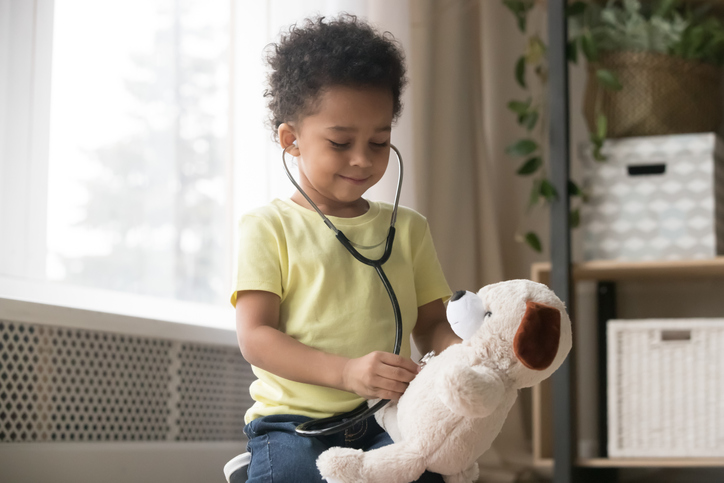 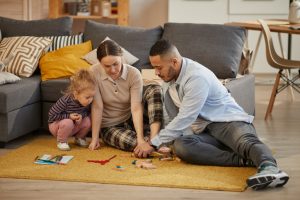 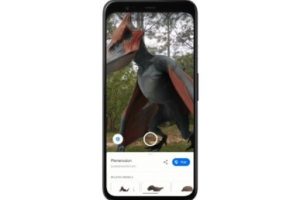 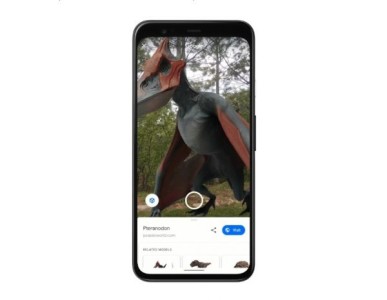