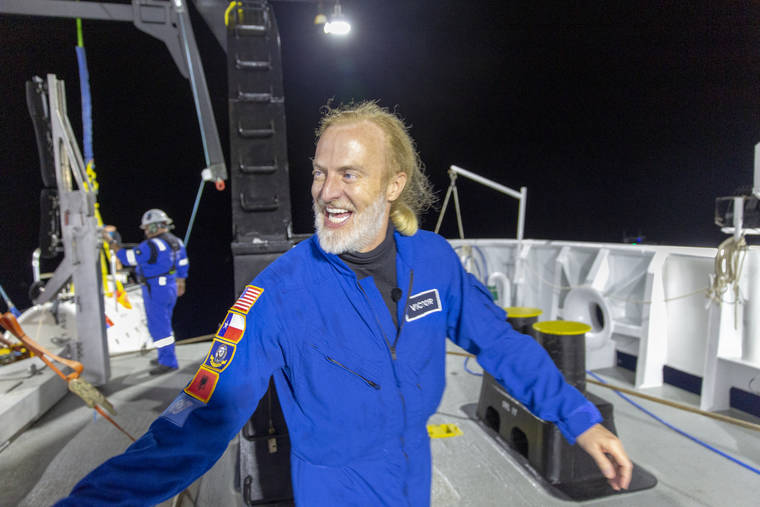 Taking the hours-long journey to what is believed to be the deepest point mankind has visited in any ocean was a complicated one, and for Victor Vescovo, it meant being constantly on the alert as he monitored his state-of-the-art vessel, but when he reached 10,928 meters into the Challenger Deep in the Mariana Trench of the Pacific Ocean, Vescovo took the advice of the man whose record he just broke — Oscar-winning director James Cameron — and took 15 uninterrupted minutes to take in the view and the enormity of the moment.

Cameron told him he’d be busy, of course, but noted that “few if any people have seen what you’ve seen” so “deeply appreciate how fortunate you are to see it,’” Vescovo recalled in an interview.

Last month’s groundbreaking mission was filmed as part of an upcoming Discovery Channel documentary series that will chronicle Vescovo’s trips to the furthest parts of the world’s waters — the Atlantic Ocean, the Southern Ocean, the Indian Ocean, the Pacific Ocean and the Arctic Ocean. He has done all except the Arctic plunge, which is set for the fall.

The entire journey took nearly 12 hours — four hours to descend, four hours spent at the bottom, and then about four hours to ascend again. Vescovo, a businessman and amateur pilot who has also traversed the highest mountain peaks, including Mount Everest, said the goal of the expedition was not to best Cameron’s mark in the ocean, but to go to areas of the waters that were unexplored.

“I was stunned to discover when I did my research that of the five oceans, four had never had a visitation to their bottoms,” he said. “I thought it was about time that someone actually did that.”

For his journey, Vescovo travelled in a vessel called the SDV Limiting Factor, a titanium craft that is billed as the “ultimate submersible” and the only one able to travel to such depths. It was outfitted with high definition cameras that documented everything, including creatures unknown to man.

“There’ve been numerous new species thought found on this expedition. The scientific group is thrilled with the things that have been brought back for additional analysis. It’s really great,” he said.

He saw a very unusual jellyfish in the Indian Ocean but there was also an unsettling find — trash, particularly plastic, in the deepest part of the water.

The discovery of plastic in such far reaches proves the need for more vigilance to protect the oceans, said Andy Sharpless, CEO of Oceana, which describes itself as the largest worldwide group in the world with the goal of saving the oceans.

“Vescovo’s discovery of plastic in the deepest part of the ocean is disturbing but not surprising because plastic is found throughout the water column in our oceans,” he said in a statement. “That’s why it can’t be easily ‘cleaned up.’ We need to focus on reducing the use and production of plastic in order to really protect our seas from plastic.”

We need to focus on reducing the use and production of plastic in order to really protect our seas from plastic.”

Patrick Lahey of Triton Submarines, which made the vessel that transported Vescovo and also followed Vescovo’s dives to the Challenger Deep, said the missions show why more exploration of the oceans are critical for science’s benefit.

“These are large swaths of the oceans that we’ve never seen that really we know virtually nothing about. I think it’s important for us as human beings to study these areas,” said Lahey.

“The ocean is the life force of our planet. I think this is a great opportunity for us to learn more about it and to try to use this tool that we’ve developed for that purpose.”