If Berlin’s walls could talk

Berlin is a kaleidoscope of culture, colour and creativity, accented by walls that are covered with what appears to be chaotic, randomly created graffiti. For those who know very little about street art, it all seems a bit messy. At least, that’s what I thought before I learned a bit more about it. I wasn’t the only one – a few of the people with me seemed a bit bemused as we made our way to the spot where we would be meeting our guide from Alternative Berlin Tours. However, as the morning unfolded, it became clear that overlooking this form of art would be like discarding a part of the city’s history.

When you take a closer look at the intricate pictures and large words splashed across walls, you can clearly see that not all graffiti is made with the same purpose in mind. Our cheerful, bearded tour guide explained that we would be learning about three kinds of graffiti, namely tagging, posters and stickers. TRUST NO ONE. A work created specially for tourists by El Bocho. Pictures: Michelle Loewenstein.

Tagging is the simple act of writing a word or name on a wall. They can be simple and small, or big, bulging letters. The idea behind it is usually for a person or group to get their name on as many surfaces as they can find. The most popular form of tagging is called bombing, which involves using a few colours to create the graffiti. This is done in a matter of minutes in order to avoid a run-in with the police, who have little to no tolerance for the groups involved with tagging in the city.

As we walked, we started to become more aware of repeated themes, images and styles on the wall. One of these was the image of a cute little girl killing her cat in a variety of macabre yet funny ways. We learned that they were the work of an artist called El Bocho, and that the tiny terror’s name was Little Lucy. El Bocho’s work falls into the second category of graffiti – posters. The paintings are created on paper and are then pasted onto walls. This is done because it is seen as littering, and carries a much smaller fine than graffiti itself. El Bocho’s other posters include beautiful portraits of young girls. The idea behind his works is that they eventually become one with the city walls. The older posters have lost their colour, and have taken on a similar colour to the surfaces that they are painted on, something that El Bocho knew would happen.

Stickers are another way that artists bombard the city with their messages. Like posters, these are pre-made and then pasted on walls and street poles. The authorities also see this as littering, so the sticky criminals behind this wouldn’t be handed a hefty fine if caught. Our guide gave us some of his own stickers with two warnings. Firstly, we weren’t allowed to reveal his identity. Secondly, we were not to place them over the work of another artist. This would be seen as an insult, and would land him in hot water. 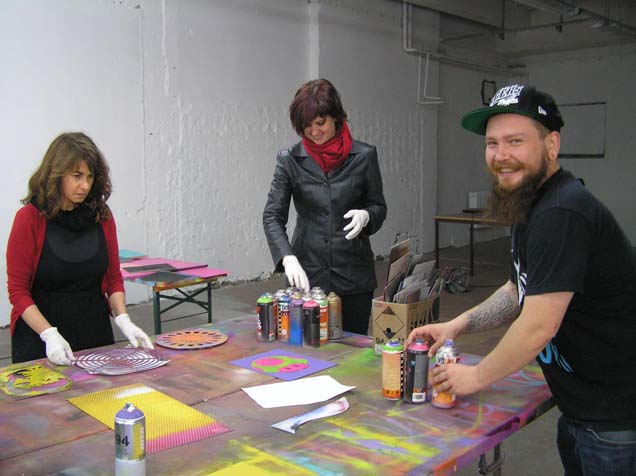 ARTISTS IN TRAINING. The media group tries their hand at stencilling.

We were then taken to a studio where we were allowed to create our own graffiti on canvases using stencils. It was there that I gained new respect for graffiti artists. I struggled to stop my cat in sunglasses from looking like a messy puddle on a horizontal surface, and it took forever to get the cans of spray paint to do what I wanted them to do. Picturing myself trying to spray an image onto a wall, in the middle of the night, in a matter of minutes, was almost impossible.

After the tour, it felt like we’d been shown a side of Berlin that not everyone knew about, and our eyes quickly sought out the themes that we had heard about on our tour. The city clearly had many clandestine stories to tell, and after we had seen something of the alternative tales on offer, we were even more excited about learning more of her secrets.

Merkel urges Germans to get vaccinated in final podcast
3 days ago
3 days ago
PREMIUM!

Merkel urges Germans to get vaccinated in final podcast
3 days ago
3 days ago
PREMIUM!