THE 23-year jail sentence imposed on wife killer Morné Croeser (34) yesterday should recognise the fact that his victim, Erika Croeser (32), was once a vibrant young woman — a daughter, sister and a mother — whose hopes, dreams and expectations abruptly ended when Croeser callously stabbed and killed her on August 28, 2010. 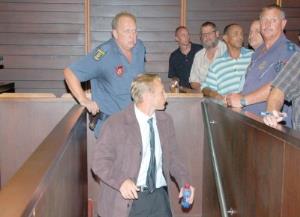 THE 23-year jail sentence imposed on wife killer Morné Croeser (34) yesterday should recognise the fact that his victim, Erika Croeser (32), was once a vibrant young woman — a daughter, sister and a mother — whose hopes, dreams and expectations abruptly ended when Croeser callously stabbed and killed her on August 28, 2010.

This was the sentiment expressed by Judge Esther Steyn when she sentenced Croeser to more than the minimum term of 15 years’ imprisonment determined by the legislature for the “vicious” murder.

She ordered that Croeser must serve 15 years of his jail term before he can be considered for parole.

Before the sentencing, defence advocate Murray Pitman said Croeser continues to maintain his innocence, despite the court’s verdict.

However, based on the court’s findings that the murder was not preplanned, Pitman suggested that the killing most likely occurred on the spur of the moment due to “some emotional storm” that had caused Croeser to lose control. He asked the court to show him mercy.

State advocate Irene Neyt, however, urged the judge to consider imposing life imprisonment on Croeser even though the murder had not been premeditated and said he has shown “absolutely no remorse”.

Instead he had spun a “web of deceit” around the killing of his wife to the extent of stabbing himself in the abdomen to cover up his crime.

Judge Steyn agreed that Croeser was not remorseful.

The 14 stab wounds inflicted to Erika Croeser’s face, neck and left hand indicated she was killed while she was incapable of defending herself, she said.

The judge took into account that Erika Croeser had tried to obtain a family violence interdict against her husband before the murder.

“You conceded that she had threatened to leave you and that she would, in all probability have got custody of the children … Sadly she never got the chance to exercise her choice to leave the man,” the judge told Croeser.

She said the brutality of the attack was visible from the photographs of Erika and of the crime scene and was regarded by the court as an aggravating factor as was the fact that Croeser attacked his wife in the safety and sanctity of her home.

The judge added that spousal murders like this were prevalent in this country, are on the increase and “strike horror into the hearts of people”.

Steyn said people who find themselves in unhappy relationships are entitled to leave their partners without the fear of physical attacks on them and a message had to be sent that hurting (or killing) one’s partner would not be tolerated and would be severely punished.

Judge Steyn took into account in favour of Croeser that he was a first offender, and an exemplary police officer according to his record, as well as the fact that he is the father of two young children. She also took into account that he had been suspended without pay by the SAPS for five months between April and October last year, and had been assisted financially by his father (Danie Croeser).

Croeser’s father was too overcome by emotion to speak to the media yesterday and could be seen seated despairingly, holding his head in his hands at times, between adjournments in the case.

Erika Croeser’s twin brother, Francois Schafer, speaking on behalf of his mother, Francoisona, brother Gerhard and other family members, said they were “delighted” with the sentence.

“It won’t bring Erika back, but it will send a message to people not to assault and kill their wives … especially law enforcement officers,” he said.

Judge Steyn refused to grant Croeser leave to appeal against his conviction and sentence and said she did not believe any other court would come to a different conclusion.

She also refused to consider granting Croeser bail pending a petition to the Supreme Court of Appeals which she said was premature until the petition has been formally lodged.