The day the aliens landed

In 1994, school pupils in Zimbabwe ran screaming to their teachers. What had they seen? 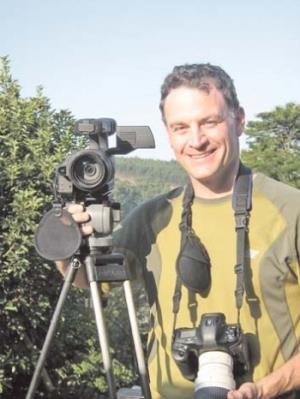 American film maker Randall Nickerson is currently visiting southern Africa to make a documentary that follows up an incident that happened at the Ariel School in Ruwa, Zimbabwe, in 1994, when 62 children aged between eight and 12 reported seeing a UFO and “strange beings” during their morning break.

Those children are now young adults scattered around the globe. Nickerson is tracking them down and interviewing them about the experience. “Their stories have not changed at all,” he says. “Not what you would expect if they had made it all up.”

“They ran to the edge of the school yard to see what this thing was. They saw this small creature walk around on top of the craft while another came down to check out the children. He was all in black, with a very tight suit. The children said he had big eyes ‘like rugby balls’.

“The children had direct eye contact with this creature. There seems to have been some kind of communication with the children about the state of the world — what we are doing to the planet, the destruction we are causing, although not all the children got this message. Some of the children were traumatised, others were excited. The young children were the most traumatised as they were at the front of the group.

“They all went screaming back to the teachers. The teachers didn’t believe them at first. But then they went home and told their parents who came to the school and wanted to know what had happened.”

Soon afterwards the children were asked to draw pictures of what they had seen. “They did this separately. The drawings were all the same.”

A BBC television crew were first on the scene to follow it up. In November 1994, Harvard professor of psychiatry John E. Mack visited the school and filmed interviews with the children. He was assisted by South African producer Nicky Carter who had already made a short documentary on the subject for the SABC. “I had a half-brother at the school,” she says. “He was off sick on the day it happened, but the children told him all about it and he contacted me.”

Carter has no doubt the children were telling the truth. “When they were interviewed by Mack with all his professional skills it was clear they were telling the truth — their voice tone, their body language. They were so consistent, they told their stories with such conviction. And they spoke about it in their own language. One child recalled being told by the alien that we should not be so ‘techknowledged’ — why make up something like that?”

Mack, a Pulitzer prize winner for his biography of T. E. Lawrence (Lawrence of Arabia) titled A Prince of Our Disorder, was a highly respected psychiatrist. However, when he began researching the phenomenon of reported alien abductions, his fellow academics looked askance. In 1994, when his book Abduction appeared, a committee was appointed to review Mack’s clinical care and investigation of the people who had shared their alien encounters with him. According to the BBC, “It was the first time in Harvard’s history that a tenured professor was subjected to such an investigation.”

After 14 months of inquiry, Harvard issued a statement stating that the dean had “reaffirmed Dr Mack’s academic freedom to study what he wishes and to state his opinions without impediment”.

In 2004, Mack was killed by a drunk driver while he was visiting London to lecture at a T. E. Lawrence conference.

Mack was guarded in his interpretation of the abduction phenomenon. To one interviewer who said that Mack seemed “inclined to take these [abduction] reports at face value”, Mack replied saying: “Face value I wouldn’t say. I take them seriously. I don’t have a way to account for them.”

In a BBC interview he said: “I would never say, yes, there are aliens taking people. [But] I would say there is a compelling powerful phenomenon here that I can’t account for in any other way. Yet I can’t know what it is but it seems to me that it invites a deeper, further inquiry.”

Nickerson sees himself as taking that inquiry further after being commissioned by the John E. Mack Institute, along with producer Dominique Callimanopulos, to make a documentary incorporating the interview footage shot in 1994 with follow-up material shot in the present.

“I want to present the story objectively,” says Nickerson. “To show the original raw material. That’s what initially interested me about this case. These children all describing seeing the same thing. You can tell they are not lying. But having seen this footage I thought: I need to go to this place, to talk to people, I need to investigate it for myself. Did this really happen?

“The subject has to be approached as scientifically as possible,” he says. “There are questions that we need to ask. It’s a case of presenting the evidence just like court.”

Despite this rigorous approach, isn’t there a danger he will simply encounter those on the “lunatic fringe”? “I have found those are the people who have all the answers, but people to whom something like this has really happened don’t. They have millions of questions. There is a humility about them, they realise it’s not about them.”

At the beginning of the project Nickerson set about contacting those people who had been among the 62 children who had witnessed the sighting. “They are mainly students in Canada, the United States, New Zealand and Britain.”

Tracking them down hasn’t been that difficult. “They are contacting us because of what we put up on the John E. Mack Institute website. What is interesting is that their stories remain the same as in 1994.

“They were affected profoundly,” says Nickerson. “At the time one girl was told by her parents not to talk about it, that she had imagined it all. But then she found other people’s stories on the Internet. She got in touch with them and realised ‘Oh my God, that was real’.

“Others I’ve met never doubted it. They say the experience opened up new horizons for them.”

Nickerson cites two students who are now studying in the U.S. “Their father said they would never have done that, but after their experience the children were totally changed, that’s what convinced him that something really happened.”

Nickerson’s first stop during his visit to southern Africa was Ariel School. “I interviewed teachers and workers who were there at the time.” He also came across people from two different schools in the area who had similar sightings on the same day.

Nickerson is now in South Africa trying to track down those living here who were witnesses on that day. He will be here until the end of April following up leads resulting from two radio interviews he has given.

• If you witnessed the Ariel School sighting or have any information regarding it, you can contact Randall Nickerson at 082 154 731 or e-mail rsnick@gmail.com You can also contact Nicky Carter at 072 632 2330 or producer Dominique Callimanopulos on dominique@elevatedestinations.