Evidence of lava are found in the Drakensberg basalts. 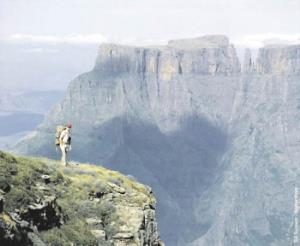 Incandescent, red-hot lavas pour out from a myriad fissures in the Earth’s crust. The flowing, rumbling mass spreads over the landscape, consuming all in its path. Scattered trees form paltry obstacles to the inexorable advance of the lava front, bursting suddenly into flame to add to the mind-blowing display of fireworks.

Ponded water in the desert depressions is vaporised in hissing clouds. Dinosaurs dart hither and thither, always away from the lava front, but their efforts to escape will ultimately be in vain. Ejecta spew skywards from the fissures, filling the air with molten bombs. Ignimbrites — hot ash clouds which vent from some of the fissures — fill the air and the ash falls back to Earth, accumulating in layers which are then buried by subsequent lava flows. It is a 160-million-old Dante’s Inferno visited upon the Earth.

We are almost at the end of Karoo times. Gondwana is under stress due to increased mantle activity beneath the continent, leading to uplift and rifting. Tensional stresses cause the crust to pull apart and out of these fissures pour millions upon millions of cubic metres of molten, incandescent lava.

At the end of this volcanic event, a thickness in excess of 2 000 metres of material will have flowed out across the Gondwana landscape, burning and burying everything before it in a fiery embrace. These kinds of outpourings are aptly known as flood basalts and have occurred in a few localities around the world.

A walk up or down Sani Pass will reveal the evidence of this cataclysmic event.

The lava flows are quite easy to make out, as their bases are marked by pipe amygdales.

We are all familiar with a shaken can of cola — once the can is opened, the cola comes pouring out with its attendant mess.

Lavas behave similarly — their origins are in the deep bowels of the Earth, and on reaching the surface where temperatures and pressures are low, the dissolved gas and fluids are free to expand and escape from the molten rock.

Close examination of many of the Drakensberg basalts will reveal round, white nodules within the greater groundmass of basalt. These are amygdales. At the bottom of the flows, most probably due to the chilling effect of the cooler material below, long pipe amygdales formed, which rose up through the molten material, before being eventually frozen into the surrounding rock once temperatures had fallen sufficiently.

In places it is possible to work out the direction of flow of the lava, as the pipe amygdales are dragged in the direction of flow. Pahoehoe (pronounced pa-ho-ee ho-ee — a Polynesian word used to describe the ropy, rumpled texture of fresh lavas, particularly well known from the Hawaiian Islands) also occur, and these same textures are also preserved in the 160-million-year-old lavas of the Drakensberg.

If you are observant, and possibly know what you are looking for, there is a horizon of welded tuff about halfway up the pass on the left side. This once was red-hot volcanic ash which fell to Earth and became welded together to form the ash horizon.

The next big question of course is how all this lava got to the surface through all the underlying rock. Well, scattered throughout KwaZulu-Natal, and much of the Karoo for that matter, are thousands of dolerite dykes, which were the feeder pipes which carried the molten lavas upwards to be extruded on the surface.

These dykes now form areas of elevated relief around the midlands, as well as boulder beds — sometimes there are more boulders to be seen than soil and vegetation.

Fantastic examples are to be found on the road towards Nqutu, Rorke’s Drift and Insandlwana. Some of these dykes also cross-cut the basalts themselves — carrying lava ever higher in the volcanic pile. In addition to the vertical dykes are horizontal sills, which intruded along the bedding planes before solidifying.

Many of our koppies and hills are now capped by dolerites which form a hard, erosion-resistant layer which protects the underlying softer sediments from erosion. Some of these dolerite bodies are of significant size.

The quarry at Hilton is a fairly large hole in the ground and that hole used to be hard, unweathered dolerite. It makes a fine aggregate for both concrete and road building, and dolerite bodies of the size of Hilton’s have significant commercial value.