A giant of South Africa

RESIDENTS in the Johannesburg apartment block where Professor Phillip Vallentine Tobias lived joined the community of mourners in remembering his cultural legacy yesterday. 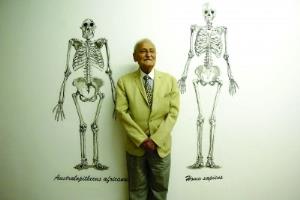 RESIDENTS in the Johannesburg apartment block where Professor Phillip Vallentine Tobias lived joined the community of mourners in remembering his cultural legacy yesterday.

Tobias, who died at 86, had been ill for over three months. He was a neighbour, quiet and absorbed, ever polite and deserving of the tributes that recalled him as a scholar and a gentleman, a pioneer and a dedicated South African.

I interviewed Tobias several times, most recently in 2006 when he published his memoir Into the Past. Tobias stood no taller than 1,5 metres, and well into his 80s he provided an example of how some among our own species continue to express enthusiasm and energy in their work.

Tobias, whose team recovered 4,17-million-year-old foot bones from the most complete Austrolopithicene specimen at Sterkfontein, dubbed “Little Foot” by him and Ronald Clarke in 1995, was a surprisingly reticent and modest man.

He talked about his continuing search for Sterkfontein’s “ultimate messages” and the need for synthesis “between ancient and modern peoples; genetics and evolution; long-term and short-term development; brain, mind and behaviour”.

He was happier as an adult than he was as a child, he said, and happiest “since the new South Africa. It has been a wonderful stimulus, a fillip in my development and in my thinking”.

The untimely death at 24 of his sister Val — he was 16 at the time — from diabetes spurred him to study heredity at a time when there was no South African specialist in medical genetics. The magical world of chromosomes, the bearers of genes, had Tobias in thrall. His entry into the Wits anatomy department in 1944 under Raymond Dart, professor of anatomy, led to research the evolution of human posture.

Tobias said in our interview that there was a synchronicity between his own birth date, October 14, 1925, and the discovery of the Taung skull by Dart, on February 3, 1925. This was a new species, a new link in the chain that ends with modern humankind — Homo sapiens.

Tobias, who was nominated for the Nobel prize three times, said he developed “a symbiotic relationship” with the Taung baby, who provided the first evidence that early hominids lived in Africa. Tobias became its legal guardian in 1958, when he succeeded Dart.

In 1984 he carried the skull of the Taung fossil across the Atlantic to the American Museum of Natural History in a carry-cot.

He was distressed when the “ancestors” exhibition at the museum was almost closed down by protestors who dubbed the Taung skull “an apartheid fossil”. New York city councillors were forced to erect notices saying the fossils belonged to all humankind. Tobias, who was elected president of the National Union of South African Students (Nusas) in 1948 and launched the first anti-apartheid campaign in South African universities, sympathised with the American protesters.

But the fossil, which preceded the European settlers in Southern Africa by 2,5 million years, was certainly no outcome of apartheid. Tobias’s work disproved racist theories about humankind.

His brilliant career was ridden with personal conflict. He declined several invitations to take up chairs at universities overseas. He opted for Wits and in 1959 became professor and head of the department of anatomy, a position he held until 1993. Apartheid legislation in education was passed in Parliament in 1959 — “a dark time”. To leave the university and the country would be intellectual suicide, he wrote in his journal.

Tobias, who was the only person to hold three professorships simultaneously at the University of the Witwatersrand — in anatomy, paleoanthropology and zoology — succeeded in having the Sterkfontein Caves proclaimed a World Heritage site. He was surprised and alarmed to meet resistance in some feminist circles for his role in bringing home the remains of Saartjie Baartman, the Khoi woman who had been exhibited in Paris as an ethnological and sexual curiosity in the 19th century.

He established the Institute for the Study of Man in Africa in 1956 to advance the study of human ancestry and evolution, heredity and genetic composition and bodily structure in Africa.

Tobias, who emerged from an ordinary, “politically naive” white middle-class South African home, charted his origins in his memoir, which bears out his heredity theories.

In our interview he described his mindset, “a spirit, perhaps, that was enthralled by chapter 30 in the book of the prophet Ezekiel: ‘The hand of the Lord was upon me, and carried me out in the spirit of the Lord, and set me down in the midst of the valley which was full of bones’.”

The teenage Tobias, who once thought of entering the rabbinate, said: “I cling to my faith.”

He had no idea then that he would one day make bones live “in my mind’s eye, to clothe them with ligaments, tendons and muscles, to see how they stood, walked and ran”.

He talked about the continuing contradiction between religion and science, between discovery on one hand and on the other the creation of destructive energy that is causing the destruction of our planet. He wrote an article in a Muslim journal many years ago called “Synthesis or Chaos” — it was an appeal to find a way out of the apparent impasse between religion and science.

“Mankind, as we understand it today, has become a creature with a brain capable of developing ethical systems …

“It should not surprise anyone to hear an evolutionist say there is room for ethos, and faith in humanity. We have the brain capable of conceiving it. I am not claiming the only kind of ethics are those related to religion; that would be too simple-minded … because political systems have developed ethics. I am trying to show that there is a legitimate place for this, and all of this is behind my quest to find the answer to the apparent contradictions between religions and science.”

Tobias was working on Part Two of his memoir, which remains in a state of incompletion. His legacy will stand. Tobias and his many quests, including for a synthesis of science, religion, faith and theology will not be forgotten.