A great weekend of sport 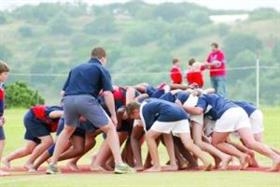 THE annual derby between Creston College and Southcity Christian Schools was declared a roaring success after the only two independent schools on the South Coast clashed in 20 fixtures this weekend.

The fledgling rivalry — this was only the third time the two schools had met for the winter derby — drew 2 000 supporters to Creston on Saturday for a round of rugby and hockey fixtures, following a handful of games the day before.

Director of sport at Creston, Gareth Olivant, said the contests were played in a great spirit, with only a few minor injuries. “It was a very successful weekend with only two sets of stitches and bumps and bruises to report. Creston sports department wishes all injured players a speedy recovery.”

Olivant said both schools could be proud of themselves for the way the players, staff and parents acquitted themselves.

“I am very pleased that both schools played all games in the correct spirit and they can both take a lot out of the weekend. The spectators were also great and there was no report of any poor behaviour.”

Creston made full use of home ground advantage in the final match on Saturday when the first XV rugby team triumphed 21-5, in the process avenging last year’s defeat.

Creston captain Warren Fairbrother and team-mate Sinqobile Mhlongo stood out in the victory, which, despite the 16-point margin, was secured only in the last quarter of the game.

Earlier in the day the girls’ hockey teams played to a 2-2 draw in a closely contested match. In another close match-up, Creston’s boys’ hockey squad took a 1-0 win for the home side on Friday afternoon.

But while the hosts dominated the main games, winning two of the three first team fixtures, Southcity fared better overall. The visitors took the spoils with nine wins from the 20 games played. Creston won eight, with three fixtures ending in a draw.

Creston principal Phil Hawke said they were thrilled with the weekend, which took them a term to organise to perfection.

“We are very pleased with the outcome of the weekend. We set out to achieve a successful sporting weekend and we achieved just that.”

Hawke said a lot of time and planning had gone into the logistics for the weekend. “The weekend was very well organised. There have been a lot of compliments from all sides. Well done to all at Creston for their commitment and dedication.”

He added that the exercise was an important one to build community spirit. “Throughout the year both schools compete against each other. This derby is a wonderful opportunity to give children that greater sense of community. It’s not just about winning; it’s about sport bringing people together.”

Despite numerous attempts yesterday, Southcity could not be reached for comment. — Witness Reporter.