A number-cruncher’s guide to happiness

“I ALWAYS tell people that my wife is the best investment I ever made, and that my children are the best returns.”... 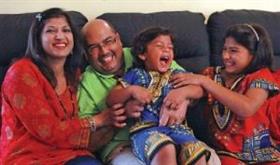 “I ALWAYS tell people that my wife is the best investment I ever made, and that my children are the best returns.”

Although Deepak Nagar (40), the incoming national chairperson of tax, audit and advisory firm Grant Thornton, certainly has many professional accomplishments, his family remains — by a country mile — the most important aspect of his life.

He told The Witness that his “high school sweetheart” and wife Deepa, who worked in the human-resources sector and is now a housewife, often teaches him lessons that can be applied in his high-powered position.

They have two children, a nine-year-old daughter Chiara and three-year-old son Pranav.

Despite his hectic schedule as managing partner of the firm’s thriving Durban office, he is ever ready to take on the responsibilities of fatherhood.

Although he is often away on business, Nagar spends his mornings dropping off his daughter at school.

“We get to spend quality time together in the mornings. More importantly, and as far as possible, I do not work on weekends. I also try to get home before the children go to bed.”

Technology also helps to keep the family structure intact. Nagar and his wife are now Blackberry Messenger (BBM) addicts, with most of their BBM conversations revolving around the wellbeing of their young family.

“I also spend a lot of time on Skype with my wife and children when I am travelling.”

His late mother Jaya instilled the importance of family relations, noting that the choice of one’s life partner has a significant bearing on the outcome of one’s life as a whole.

“She was the epitome of what a wife should be. She provided for the family on so many levels, through her work in the house, as well as on an emotional and nurturing level. She also helped my father with extra tailoring work, such as stitching garments.”

Nagar’s appreciation of family and the personal aspect of life helped him become a successful manager, who constantly inspires his staff.

“Staff members cannot put their families aside, even when they are at work. It will inevitably affect their productivity. I always tell my staff that taking care of their health is also very important as there is no second chance in this area. If they take care of these two more important areas, they will be successful at work.”

His management style has paid off handsomely. Turnover has doubled in five years, and the staff complement has grown from about 60 to 100.

“We are a solutions-based business. We do make mistakes, but we ensure that we learn from them. I learnt this from my wife,” he added.

Like many top-ranking professionals and entrepreneurs, Nagar’s formative years were constructed in humble beginnings as part of a poor family of six, including three younger sisters who are now professionals in different fields.

His father Dalpat (67) was a tailor in Durban, who worked extra hours to save for his children’s educational needs.

“We had no luxuries. We wore old clothes and had to put up with roof leaks and no blankets for many a year.”

Raised in Overport, Durban, Nagar developed a passion for mathematics and numbers from an early age. He was also exposed to the business world as a young man.

“Mathematics allows you to be very analytical and to think differently. No matter what business or career you go into, Maths and money will be involved. I also worked at various businesses owned by other members of our extended family — and I soon made this link. When looking for career options, it became clear to me that accounting was the right choice.”

He completed a BCom accounting degree at the then University of Natal (Durban), followed by an honours degree via Unisa.

In 1994, his association with Grant Thornton began with the commencement of his articles at the firm.

He moved swiftly up the ranks, becoming a partner in 2000.

As the eldest sibling, the pressure for him to succeed remained intense.

“I wanted to honour my parents and help my younger siblings. I kept telling myself that I had to make a success of my life.”

His new role as partner, coupled with various high-ranking roles in various accounting-industry bodies also brought out the extrovert in Nagar. He held the prestigious and inaugural role of chairperson of the Independent Regulatory Board for Auditors (IRBA).

“I was an introvert, but these roles and responsibilities soon taught me the value of public speaking and networking.”

He embarked on a three-year strategy, following his appointment as managing partner of the firm’s Durban office in 2008.

Nagar began by retaining the existing managers. More work began to come into the office, and these accounts were well serviced by the managers who had been retained.

“We are now a player of size in the industry. Many businesses have turnovers exceeding R500 million. Our clients include several JSE-listed firms.”

The realisation that the days of a generalist auditor are over has also helped to develop many staff members.

“We now focus more on creating specialised business areas for each partner. Legislation is too onerous, and the world is too complex to have general auditors. Our next area of focus is tax specialisation.”

Integrity is a key value in Nagar’s life.

“Integrity and doing the right thing for the right reasons are very important to me. I always think about the impact my actions will have on my family and colleagues.”

So how does he measure success in life?

“Nothing is more important than family. This is how I gauge success in life, by the happiness I see in the eyes of my wife and children. They say that life is measured not by the number of breaths you take, but by the moments that take your breath away. My family never fails to take my breath away.”