MORE than 30 000 people attended the Royal Agricultural Show in Pietermaritzburg at the weekend – with occasional traffic gridlocks the only major problem reported to the organisers. 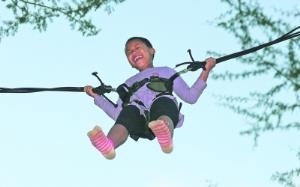 MORE than 30 000 people attended the Royal Agricultural Show in Pietermaritzburg at the weekend – with occasional traffic gridlocks the only major problem reported to the organisers.

Royal Agricultural Society general manager, Terry Strachan, said: “Our attendance is neck and neck with last year’s… and we’ve had no real problems, except rushes at certain times, which have created gridlocks in our carparks for an hour or so. Everyone seems very happy.”

Visitors to the show were treated to displays by the Eqstra Flying Lions Aerobatics team, led by Scully Levin – one of

color:#1F497D”>The Harvard display team showed off their skill shortly before the KwaZulu-Natal Philharmonic Orchestra presented the concert, A Royal Symphony.

The Parlane SuperSpar and Witness-sponsored KZNPO concert, which replaced the popular Concert in the Park, drew hundreds of enthusiastic spectators to the main arena where they enjoyed a programme, conducted by British maestro, Richard Silver. The soloists were Pietermaritzburg-born London-based soprano Sally Silver, Soweto-born lyric tenor Lionel Mkhwanazi, and Hilton-based baritone Andrew Butler.

Also on stage were students of the Opera School and Choral Academy (OSCA) at the University of KwaZulu-Natal Howard College campus, and during interval the crowd was entertained by the Pietermaritzburg Caledonian Pipe Band.

Away from the main arena, which also hosted a parachute display and show-jumping competitions, visitors were able to explore the many halls and stands showcasing everything from the latest car models to tasty food items and clothing; or simply had a ball at the funfair.

Away from the showring visitors enjoyed fashion shows and sheep shearing demonstrations in the Wool and Sheep Expo.

Today’s highlights include a performance by the South African lipizzaners accompanied by the young operatic cross-over group, Bella Voce Africa, at 6 pm in the main arena.