A storybook guide to mental disorders

Stephanie Alexander reviews the book Tigger on the couch: The neuroses, psychoses, disorders and maladies of our favourite childhood characters by Laura James. Published by Collins. 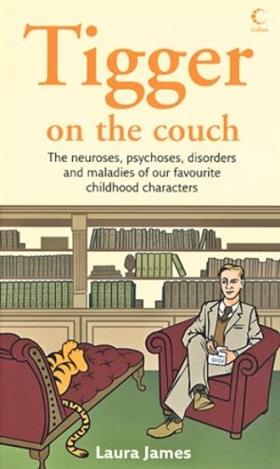 Author Laura James addresses this book to “all those bravely battling a psychological disorder and to the dedicated professionals who work tirelessly to help them”. It is heartily endorsed by one of the latter, consultant psychiatrist Dr Gareth Vincent.

James’s aim is to help demystify and destigmatise mental disorder in an accessible and appealing way, using as examples beloved characters from children’s literature, such as Winnie-the-Pooh and his friends, inhabitants of and visitors to Oz and Neverland, and lots of other favourite storybook people, including Willy Wonka, Cinderella and Goldilocks, Peter Rabbit and Pollyanna.

On the face of it, not a bad idea. We’re given a painless, often humorous outline of all sorts of conditions, discovering en route that the Queen of Hearts, the Wizard of Oz and Peter Pan are all exemplars of varieties of narcissistic disorder.

The sorrowful Eeyore has dysthymic disorder (dysphoria) and Piglet has generalised annxiety disorder.

At the end of each chapter there is a brief discussion of the methods of treatment and an exercise to help you recognise the various tendencies, in others, as well as in yourself.

The book developed out of James’s experience of emotional disorders in her own family, and her struggle to be supportive and to overcome her fear of mental illness. Those who have had similar experiences may welcome her light, friendly, even cosy approach to the subject, and may be glad of the appended list of resources, mainly literature, and of support groups, some of which have international connections and websites.

There are a few reservations, though. Readers who value the old friends of their childhood may not be happy to see them treated as “cases”. Also, it’s possible that the book oversimplifies. Finally, the book punts “normality” as the ideal, suggesting that most of us aren’t “normal”, but can be tagged as in some way “disordered” and in need of help. In other words, some readers may come away from it convinced that they, or perhaps a family member, has a mental condition, made more, not less, sinister by being dressed in fairytale.

So, while the book is potentially as helpful as James intends, it does need to be read thoughtfully and, perhaps, in conjunction with more serious texts.