A thrilling victory for College

SUNDAY was the date set for the two semi-finals in the KZN Inland region of the CSA National T20 competition. ... 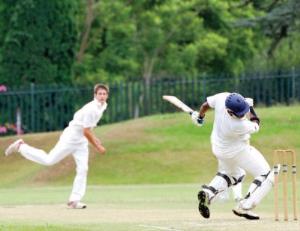 SUNDAY was the date set for the two semi-finals in the KZN Inland region of the CSA National T20 competition.

It was at the end of a very busy week for the four sides involved.

Maritzburg College hosted Hilton in the morning, and St Charles hosted Michaelhouse in the afternoon.

College have won the Inland final and the KZN final for the last two years.

At one stage it looked as if Inland would have a new champion, but College dug deep and won off the penultimate ball of the game.

Hilton elected to bat first and after the first two overs had scored 21 runs. College bowlers then pegged them back and after 10 overs they were 57 for three.

A fourth wicket partnership of 45 between Tom Curran (21) and Luke Maingard (36) took them to 82 before the next wicket fell.

When Curran went out, Hilton stuttered and with Tim Guise-Brown bowling tight they reached 125 for eight in the 20 overs.

College started slowly with the fifth wicket falling in the 10th over with the score on 53.

A match-saving partnership of 68 between Jason Alexander (43) and Tyron Walsh (28 not out) took them within sight of a win.

Alexander went out with the first ball of the last over with College still needing six runs to win.

With two balls left and College still requiring three runs, Tyron Maher lofted the ball over the infield to reach the boundary, giving his side a four wicket win.

The other semi-final at St Charles was not as exciting. Michaelhouse reached 120 for eight, losing a flurry of wickets in the last few overs.

Michael Mvelase was the best of the bowlers with three wickets.

St Charles started slowly with Dean Robinson batting very well to reach 46 in 52 balls, but he didn’t get enough support.

With four overs remaining the task became very difficult as St Charles still required 41 runs. They fell 11 runs short and will rue the 10 wides that were bowled.

Tomorrow afternoon Maritzburg College will play Michaelhouse in the Inland final (venue not decided) to see who will play Westville in the KZN final on Friday at the Maritzburg Oval.