‘A win for Madiba’

ANOTHER superb all-round performance from the Proteas saw India wilt at Kingsmead yesterday by 134 runs, the visitors bowled out for 146 in pursuit of 281 runs in the second Momentum One-Day International, giving South Africa the ... 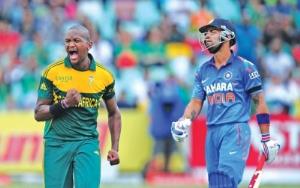 ANOTHER superb all-round performance from the Proteas saw India wilt at Kingsmead yesterday by 134 runs, the visitors bowled out for 146 in pursuit of 281 runs in the second Momentum One-Day International, giving South Africa the series ahead of the final one-day encounter at Centurion on Wednesday, a day/night clash.

A wet outfield saw the match start at 11.30 am, reduced to 49 overs a side, and after winning the toss, Indian skipper MS Dhoni asked South Africa to bat. Against an Indian attack that looked ordinary, with little firepower, Hashim Amla (100) and Quinton de Kock (106) became the second opening pair in ODI history to make consecutive opening stands of more than 150 as they put the bowling to the sword.

They put on 194 in 35.1 overs to add to their 152 at the Wanderers in the first match of the series on Thursday as De Kock reached his second consecutive century (112 balls, 8×4), his third in a month and second in four days. The partnership was a record for the highest opening stand in ODI matches at Kingsmead, surpassing the 170 of Matthew Hayden and Adam Gilchrist in 2001/02.

Captain AB de Villiers (3) promoted himself up the order to number three, but was brilliantly stumped by Dhoni. All the while, Amla was moving toward his first international century in any form of the game at Kingsmead, which he reached from 116 balls with eight boundaries, his 12th ODI century. He was out soon after, touching a bouncer from Mohammed Sharmi to Dhoni. On reaching 59, Amla became the fastest batsman to 4 000 ODI runs, reaching the mark in his 81st innings, beating Viv Richards’s record of 88 innings.

JP Duminy (26) was run out and David Miller (0) was unlucky to get an LBW decision when he got an inside edge. Jacques Kallis (10) was bowled by Shami and a seventh wicket partnership of 35 from eight balls between Ryan McLaren ((12*) and Vernon Philander (14*) saw the Proteas to 280-6 as the final over yielded 20 runs.

Shami finished with 3-48 from his eight overs.

In reply, the Protea bowlers struck early, Dale Steyn accounting for Shikhar Dhawan (0) and Tsotsobe sending Virat Kholi (0) packing. At 16-2 after four overs, the Indians were up against it and Tsotsobe struck a second time, having Rohit Sharma (19) brilliantly caught by Amla at short mid-wicket as he attempted a pull. Morné Morkel, extracting great bounce from the wicket, accounted for Ajinkya Rahane (8), playing loosely at a rising delivery to be caught by keeper de Kock and another heavy defeat was on the cards.

Dhoni strode to the wicket at 34-4 after 8.4 overs and added 40 with Suresh Raina before being caught by de Kock for 19. Rushing to get 20 overs in to constitute a result as fine drizzle arrived, the Proteas remained on top, Raina (36) falling to a stinging catch by Miller at cover (96-6).

Ravichandran Ahwin (15) and Ravindra Jadeja (26) put on 38 for the seventh wicket but it was game over when De Villiers took a blinder at long on to snaffle Jadeja. Tsotsobe and Steyn wrapped up the rest.

Steyn finished with 3-17, Morkel 2-34 and Tsotsobe 4-25. An interesting observation was while India were bowled out in 35.1 overs, it was at this stage the Proteas lost their first wicket.

MS Dhoni: “Execution of our shots was not there and we lost wickets too often. The South African fast bowling is a weapon and they are putting the ball in the right places.

“I was happy with the target as the wicket was great for a one-day game. It’s important for us to stand up and fight, to show character in the third and final game.”

De Villiers said: “This was a win for Madiba. We played good cricket and it’s great to show consistency and wrap up the series. Two wins against the number one-ranked ODI side makes me proud of the boys and a three-nil win would be the icing on the cake.

“I thought 230-240 would be a good target and to reach 280 indicates how determined the players are.”

R McLaren not out 12

V Philander not out 14

U Yadav b Steyn 1

I Sharma not out 0