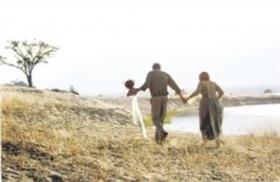 THE last time I went back to Zimbabwe it was to attend a family wedding. In a country in which reasons to celebrate don’t come around too often such opportunities are gratefully embraced and — in a grand romantic gesture — it had been decided to make this an extra special occasion by holding it on the banks of the Zambesi River.

On the drive up from Harare the results of Robert Mugabe’s land grab had been all too plain to see. For every surviving homestead, I passed at least a dozen whose occupants had been forced to up stakes and flee. Tobacco barns stood derelict and empty, irrigation equipment and farm machinery lay strewn across the countryside.

Through the windows of my car I could still make out the vague outlines of fruit and vegetable gardens now blurring into the grass while the bush had already begun to recolonise the ploughed fields. Here and there small groups of lost-looking cattle blocked the road or wandered aimlessly along the rusted, broken fence-lines. Uncontrolled bush fires blazed away everywhere.

An entire industry, a whole way of life, appeared to be dissolving before my eyes.

Only the Zambesi Valley was as I remembered it. Cresting the top of the escarpment, I braked and pulled into a lay-bye — a favourite pit stop of mine. From this road-side eyrie I could see clear over to the distant outline of the Zambian side of the escarpment shimmering in the haze.

Squashed into my tiny little cottage in central Pietermaritzburg with its high walls and razor wire I had often found myself aching for the empty space of the vast plain that stretched out in front of me.

The air was thick with heat so I cracked open a beer and sat there while a pair of Bataleur — still relatively common in these parts — wheeled overhead; dwarfed by the immensity of it all. For the first time since I started out on my journey I could feel my jangled city nerves starting to thaw and for a brief while I was able to edit out the scenes I had just driven through.

I have spent much of my life looking for roots and reasons but sitting at that roadside lay-bye, under an invincibly sunny sky, listening to the baboons arguing in the rockfaces above and the sound of the long-distance haulage trucks groaning up the steep incline, I felt I had found my spot in the universe, my true spiritual home.

I could probably have stayed there all day, lost in that hypnotic trance, but I had business to attend to and ahead of me stretched the dusty, rutted track to Mana Pools, tapering off to infinity through the Mopani trees, baobabs and Jessie bush.

There was something comfortably familiar about the scene that greeted me at the river. Pick-up trucks were backed up in a line along the side of the road and under a cluster of tall trees a makeshift wedding reception area had been cordoned off. Inside it a crew of women volunteers fussed over the chairs and tables and decorations while the men convened by the beer tent. Preparations for the great day were, it seemed, well in hand.

Beyond all the activity, on the river below, a small herd of elephant sloshed through the shallows completely unmoved by all the commotion around them.

The wedding reception itself was held further upstream, under a large, spreading tree whose branches had conveniently arranged themselves in the form of a natural church altar, through which one could take in the broad sweep of the Zambesi and the high contours of the mountains beyond. Threading his way carefully through pods of dozing hippo, the bridegroom, my nephew, came paddling down the river in a canoe while the bride arrived in a cloud of dust and exhaust fumes in an Model T Ford, especially trucked in for the occasion.

Considering how severely depleted the ranks of the local farming community has become there was a surprisingly large turnout although among the wedding guests were many who had lost their farms and livelihoods or joined the great diaspora. Moving among those familiar sunburnt faces I felt very aware of just how far a distance I had put between my old life and my new, and yet how irretrievably wedded to that landscape a part of me remained.

The party afterwards was a time of toasts and nostalgic recollections with the celebrations continuing through the night. The general consensus the next morning was that it had been one hell of a bash.

Try as I might, though, I found it very difficult to escape the palpable air of sadness, the feeling that I was witnessing a final hurrah. For me, this feeling of loss was made more acute by the fact that I had also come to pay my last respects to my brother Peter who recently had died of a brain tumour and whose ashes had been placed in an old sausage tree, not far from the wedding reception area.

As I and the other members of my family gathered around it, it occurred to me I was bidding farewell not only to my brother but also in a sense to the country of my birth.

Back in South Africa the news trickling through from Zimbabwe continued to be mostly bad.

At the time of the original, government-orchestrated land invasions my two brothers had been among a tiny handful of survivors who had somehow weathered the storm. Now a new threat loomed on the horizon for my brother Paul in the form of a Major-General Nick Dube. Reputedly number six in the army chain of command, he had taken a fancy to what remained of my brother’s farm (Paul had already voluntarily downsized it three times before, giving up over 60% of it to the A1 settlers) and had used his political connections to obtain an “offer letter” on it.

Brandishing this as proof that he was now the rightful owner, he had next set up a makeshift roadblock to prevent my brother returning home. Not content with merely taking over the land he had also helped himself to the entire tobacco crop, 10 tonnes of sugar beans (valued at about U.S.$35 000), as well as farm chemicals, 1 000 bags of fertiliser, two motorbikes and all the workshop equipment.

What he had not done, however, was take into account my sister-in-law Sheila’s resolve.

Although suffering from cancer and high blood pressure, and possessing an artificial hip, she had decided she was not prepared to be separated from her dogs and under cover of darkness had gone back on to the farm down an old footpath that led from a neighbouring property. Letting herself through the security fence, she locked the gates behind her and settled in to wait out the seige.

A protracted impasse ensued with the major-general issuing countless threats and warnings while my brother — who had also managed to get back on to the farm — fought the matter tooth and nail through the courts. Faith in a bright future had given way to a grim determination to hang on.

Unfortunately the odds had been stacked heavily against them. Taking advantage of the confusion surrounding the recent election results the major-general made his move. This time the government didn’t even bother to send in the “war vets” — who they could conveniently claim were acting on their own accord — to do their dirty work.

Acting on the instructions of Dube and his wife, Colonel Gertrude Dube, soldiers forcibly evicted my brother and his wife from their farm on May 6 (their labour force of over 150 had long since fled, swelling the ranks of the unemployed). In the process the soldiers helped themselves to various personal items including, for some bizarre reasons, my sister-in-law’s underclothes, bras and prosthesis.

Although informed of the situation the local police chose not to act.

An e-mail I received from my brother said it all: “We have lost our home, livelihood and private property; a life’s work, everything we have striven for.”