PIETERMARITZBURG advocates are both intrigued and concerned by the fact that an unknown man conned his way into their chambers at the weekend and made off with the hard drive of their CCTV surveillance cameras.... 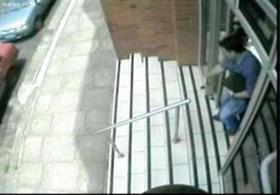 PIETERMARITZBURG advocates are both intrigued and concerned by the fact that an unknown man conned his way into their chambers at the weekend and made off with the hard drive of their CCTV surveillance cameras.

The man — whose image ironically was captured on the new hard drive he’d installed in place of the old one, which he is alleged to have stolen — drove away in a metallic grey Ford Bantam bakkie with registration number NP146037.

However, The Witness was told that the registration number of this vehicle is believed to be false.

The motive for the unusual theft is unknown at this stage.

A security guard who was on duty when the man arrived at the advocate’s chambers on Saturday morning told The Witness the man had said he was sent to “fix” the CCTV equipment by advocate Venesen Naidoo, who has since denied doing so.

The Witness was told that Naidoo usually takes charge of the surveillance equipment, so at the time the guard saw nothing wrong in letting the man work on the system.

He told The Witness that the man had first briefly gone down to the basement to inspect a camera there before returning to the foyer where he worked on the hard drive near the security desk “for a long time”.

The time on the CCTV footage indicates the man left the building at 11.15 am on Saturday.

Advocate Gerhard Roberts SC said it was of concern that the man seemed to have “inside information”.

It was also clear that he was an information technology expert who had known exactly what parts to bring and how to go about replacing the hard drive.

Roberts confirmed that a charge of theft will be laid with the police.

Anyone who can identify the man in the photograph is asked to phone the bar administrator, Esme van der Watt, urgently at 033 845 3547.