POLITICAL intrigue surrounding the high profile “Amigos” trial deepened yesterday over the timing of the court case which is set to start less than two months before the ANC’s major elective conference in Manguang. 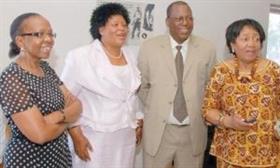 POLITICAL intrigue surrounding the high profile “Amigos” trial deepened yesterday over the timing of the court case which is set to start less than two months before the ANC’s major elective conference in Manguang.

The trial runs from October 1 to December 14, ending two days before the start of the conference.

Supporters of accused politicians KZN MEC Mike Mabuyakhulu and Legislature Speaker Peggy Nkonyeni felt this would hamper their bid to lobby support for President Jacob Zuma to get a second term in office.

The trial has exposed divisions within KZN’s ANC, with Mabuyakhulu and Nkonyeni allegedly in one camp and provincial premier Dr Zweli Mkhize in the other.

Mkhize has been perceived as being out of favour with Zuma, and this was fuelled by rumours months ago that he would be sent to New Zealand as an ambassador.

This issue came up again yesterday when the presidency, out of the blue, issued a statement denying it.

Asked why the statement had been issued, presidential spokesperson Mac Maharaj said he was responding to questions from journalists.

The 16 individuals accused in the case, all of whom are high-ranking politicians and businessmen- and women, made their first appearance in the Pietermaritzburg high court yesterday before the trial Judge Ron McLaren, who indicated the case is likely to be moved to Durban.

McLaren, who retired last year, was asked to return to duty in order to preside over the complex trial, which is expected to last six months or more, and during which evidence will be translated from English into both Zulu and Spanish for the benefit of some accused.

The reason for the move to Durban — the chosen venue being court 12 at the Durban Magistrate’s Court building — is said to be for practical reasons, such as the size of the courtroom, easy access to the “roomful” of exhibits in the case, the fact that many witnesses will fly in to King Shaka airport outside Durban and the availability of on-site parking.

Investigators as well as several of the advocates involved in the case are based in the Durban area, although some are from Pietermaritzburg.

The accused appeared amid some of the tightest security measures seen at the high court, which bristled with task force members armed with R5 rifles.

The security presence was reminiscent of that which accompanied the corruption trial of Zuma.

Journalists were obliged to obtain access tickets from police to gain entry to both the regional and high courts for the court case, and a limited number of “VIP” tickets were issued to interested members of the public to avoid overcrowding.

Barriers were placed around the courtrooms where the accused appeared and those attending were subjected to further scrutiny and were obliged to pass bags, cellphones, keys and even money, through an electronic “X-ray” machine before being allowed in.

Hundreds of police officers were stationed in the streets outside the courts, and traffic in the city centre was chaotic as a number of roads around the court were cordoned off.

* The state’s 72-page indictment cites Uruguyan businessman Gaston Savoi (director of Intaka Investments and shareholder in Skyros Medical Suppliers) as the leader, co-manager and the controlling mind behind a criminal enterprise in which all the other accused participated. The purpose of the enterprise being to defraud KwaZulu-Natal government departments and, by doing so, enrich its members.

The charges relate to allegedly corrupt tenders awarded for the purchase and hire of water purification plants and oxygen self-generating equipment supplied by Savoi’s company, Intaka, to the health ser­vice between 2004 and 2007.

Meanwhile, the Democratic Alliance yesterday said it was alarmed by reports that KZN taxpayers might foot the legal costs of politicians in the case and called on Mkhize and Finance MEC Ina Cronjé to scrap any such plans. The DA also suggested Mabuyakhulu and Nkonyeni should be suspended.