MYSTERY surrounds the fire that gutted the regional offices of the African National Congress in Jabu Ndlovu Street on Sunday night, as the regional leadership said they were stumped by the incident.... 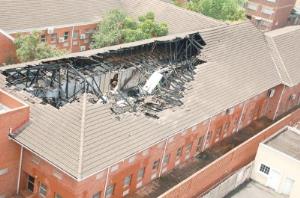 MYSTERY surrounds the fire that gutted the regional offices of the African National Congress in Jabu Ndlovu Street on Sunday night, as the regional leadership said they were stumped by the incident.

The offices of the ANC’s Moses Mabhida region were gutted by fire at about 10 pm on Sunday. The fire burned through almost half the roof, causing it to collapse.

Supa Zuma, the regional secretary of the ANC, said they were stunned by the fire.

“All we know at this point is that there was a fire inside the building.

“We do not want to speculate on what caused it and we do not have any suspicion about it; we are waiting for the investigators to come and properly look at the cause.”

He said the fire affected numerous organisational offices inside the building, which includes the ANC’s Women’s League and the Youth League.

“So far it seems that the fire did not damage most of the equipment as most of the furniture was not burned and, in offices such as the women’s league where they had left documents on top of the tables, the documents were not burned.”

Zuma said the ANC constituency office, which deals with the party’s parliamentary matters, was also burned. He said that, although the fire had been extensive, work at the organisation would continue.

“If need be, we will deal with the community and the people who need our help right here [outside], and we can also open the ANC office because it was not damaged.”

While the leadership refused to speculate on the cause of the fire, mutters amongst employees, who gazed mouths agape at the damage, suggested that the regional office was under internal strain.

Staff members at the scene said that incidents of theft were rife, and alluded to stolen items like cellphones, computers and tea sets. They said the fire was an escalation of these trends.

Others suspected arson, including a staff member who said: “The strategic way the fire was started suggests that whoever started it had hoped it would burn throughout the offices and extend into the ANC office, where the documents are kept. They wanted to burn the documents without making it obvious.”

An official at the Msunduzi fire department confirmed the fire, but said its cause and the extent of damage was yet to be determined.