LAST year my wife and I, (she, just at her “sell by” date and me, well past my “expiry date”) toured three KwaZulu-Natal game reserves, Mkuzi, Ndumu and Rhino River Lodge.... 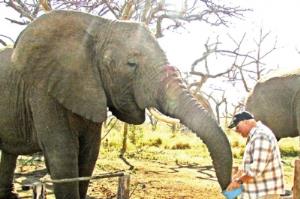 LAST year my wife and I, (she, just at her “sell by” date and me, well past my “expiry date”) toured three KwaZulu-Natal game reserves, Mkuzi, Ndumu and Rhino River Lodge.

We had absolutely no knowledge of the last horrific 15 to 20 kilometres from the Ponta D’Ouro road to the Ndumu reserve. The dirt road had been well “ironed”, however a lot of the “flints” still stood proud.

The inevitable happened; our left front tyre was punctured. There we were, stuck in Maputoland, far from the nearest garage and any possible sort of help.

Would we be attacked, robbed or hi-jacked?

A kindly couple, about our age, in a twin-cab, stopped and offered their help. I declined with thanks, saying airily, “It’s only a puncture!” (Needless to say, I regretted my attitude as soon as they had pulled off and left us!)

Next to stop, just as I’d unpacked the boot and hauled out the spare and tools, was a very rickety, multi-hued 1.3 Datsun, of unknown age.

Out climbed two gentlemen, the one dressed in Rasta threads and wearing dreadlocks.

After having sized up our predicament they quickly took over, efficiently jacked up the car, changed the wheel, packed up and had the boot reloaded within 15 minutes.

In their car, on the back seat, in the heat and dust, sat a silent gogo and three wide-eyed little ones.

Gill, my wife, easily made friends and plied the little children and gogo with fruit and cool drinks.

Once our car had been repacked and all tidied up, I gave the two men a gratuity making a remark to the effect, “It’s very hot. Buy a few beers on me!”

They countered with, “Thank you! We are Rastas. We don’t drink.”

Then they departed in a cloud of dust and rattles. We soon followed, marvelling at the kindness of the uncommon, “common” people.

The first order of business on the next day, a Monday, was to get our tyre repaired. We were told this was possible at the Spar just down the road.

Not knowing what “just down the road” might imply, we set off.

After about five kilometres the Spar down the road turned out to be a trading complex dominated by a Spar franchise, an Ithala bank, a post office, a hardware franchise, sundry smaller shops and most importantly, a bank of Engen fuel pumps. It was a cold, dry, windy and dusty place with a few people moving about.

Tentative inquiries revealed that there was indeed a resident tyre specialist who turned out to be another tall, loose-limbed Rasta, who quickly assessed the situation and raced off with our punctured tyre, me trotting behind, having visions of losing the whole wheel. He demounted the tyre from the rim in a matter of seconds using an old “muscle- powered” tyre demounter.

The loose tyre was picked up and off he trotted, about 50 metres futher on, placing it on a concrete pad.

The surface around the cut sidewall was vigorously rasped using a crown cap from a Castle quart.

Then everyone stood around while pockets were searched for sufficient money.

Once suitable cash had been found, one of the watching crowd was despatched to purchase a small bottle of meths.

This meths was poured on the inside of the tyre and over the rasped portion.

The Boss-man then rushed off to the bank, (to float a loan?) soon returning with a suitably-sized patch.

The whole tyre was then gently warmed over a smouldering fire in a bottomless 44 gallon Castrol drum.

When judged to be warm enough, the meths remnants were lit, the patch was placed over the hole and quickly and vigorously attacked with a squeegee-type instrument, and so firmly bonded to the tyre.

Reversing the process, our “tyre specialist” remounted the tyre, finally re-inflating it at the Engen pumps.

Gill, the only blonde on the scene, was treated with courtesy and curiosity by the “locals”, and despite the language barrier, chatted comfortably with all and sundry.

(I’m the only one who never seems to understand her!)

She spoke with mothers, ooohed and aaahed over their offspring.

She was engaged in conversation with tough-looking farmers and casual traders who were filling their bakkies at the petrol and diesel pumps, or who had come to acquire hardware or supplies at the complex.

The shops were clean and busy and the people cheerful and dressed for the wintry conditions.

Our tyre repairer seems to “do” very well, as, while he was attending to our problems, at least seven others started queuing and patiently waited for their turn.

We were charged the going rate; needless to say, a gratuity was included. No beggars were in evidence, and neither were we, at any time, approached for donations or hand-outs.

We left that windy, cold, dusty little complex, in the middle of nowhere, with a song in our hearts and in a warm, happy mood.

We had never felt in the slightest bit threatened and are now firmly convinced that angels wear dreadlocks!