DURBAN University of Technology (DUT) students believe that the secret ingredient to winning the coveted Durban July Best Young Designer Award is a blend of hard ... 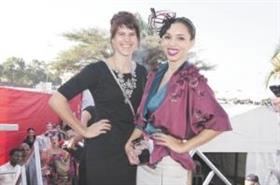 This year again, third-year student Sadie Bosworth-Smith scooped the title after topping other aspiring designers, who were required to create their own interpretation of the theme “The Big Screen”.

The finale of the three-stage competition saw 102 entries narrowed down to 10 who were present on raceday, and DUT students accounted for seven of the finalists.

After making the switch from studying a Masters in Research Psychology to pursuing a fashion diploma, Bosworth-Smith entered the competition not knowing what to expect.

“It feels completely amazing to win. What I most appreciate is the validation that comes with it. DUT has set high standards and winning this competition boosts one’s confidence,” she said.

Bosworth-Smith said she hoped to open her own business, having already started designing and selling garments from home and at the iHeart Market in Durban.

Every year, students from across KwaZulu-Natal submit entries for what is viewed as one of the most sought-after awards among young designers, and DUT students have been awarded the title for three consecutive years.

DUT spokesperson Alan Khan said they were proud of their students, who were committed to participate.

“Our students play an active role in the fashion stakes at the Durban July and we have had students winning awards and receiving recognition for their talent and skill,” he said.

Students from the Centre of Creative Arts, School of Fashion, Inscape and other institutes vied for the title.

Last year’s winner Danielle de Bruyn presented her take on a modern interpretation of “Days Gone By” — mixing a 1920s design and silhouette.

De Bruyn, now a trainee buyer for Truworths in Cape Town, believes winning the competition is the reason for her success.

“Winning the award last year definitely opened doors for me. I am currently undergoing a great training programme with Truworths,” she said.

“I would love to still be designing, but I have a great opportunity that was given to me and a great company to work for.”