Durban: 43 injured as coach crashes on N3; firm dogged by accidents. At least 43 people were injured in the early hours of yesterday morning when yet another SA Roadlink bus overturned on the N3 highway en route to Durban from Johannesburg. 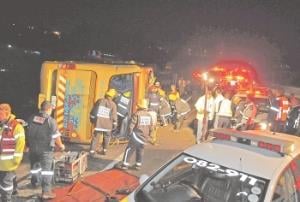 At least 43 people were injured in the early hours of yesterday morning when yet another SA Roadlink bus overturned on the N3 highway en route to Durban from Johannesburg.

The luxury coach was destined to stop at Durban railway station 30 minutes before the accident occurred on the southbound lane at Paradise Valley just after the Marianhill Toll Plaza.

The bus smashed into the crash barriers in the middle of the highway and rolled into the oncoming lane, facing Pietermaritzburg-bound traffic.

It is not clear what caused the driver to lose control, but a traffic official who spoke on condition of anonymity said he claimed he had “swerved for something”.

SA Roadlink has become infamous over the past two years for accidents and for allegedly transporting passengers in buses that are not roadworthy.

Three people, including a six-year-old child, died when an SA Roadlink bus and a bakkie collided on the N2 near Plettenberg Bay in the early hours of November 26 last year.

On December 24, 2006, 12 people were killed when an SA Roadlink bus ploughed into a bridge on the N3 close to the Liberty Midlands Mall in Pietermaritzburg. A spate of accidents by the same company followed, resulting in a short suspension imposed by the KZN government.

The company said of the 2006 crash that the bus suffered a tyre blow-out and that the accident was not due to negligence on the driver’s part.

On October 2, 2007, an SA Roadlink bus was pulled off the road after traffic officials noticed it was leaning badly to the right-hand side. The bus was taken to Mkondeni traffic department for a roadworthiness check and failed the brake test “dismally”.

KwaZulu-Natal traffic spokeswoman Zinhle Mngomezulu said they are still investigating possible causes of yesterday’s accident and have impounded the bus in Pinetown to check its roadworthiness.

KwaZulu-Natal MEC for Transport, Community Safety and Liaison Bheki Cele expressed deep concern over the accident. He encouraged all drivers to be alert at all times.

“I further encourage bus owners to ensure their buses are in a roadworthy condition and to allow rest from time to time on long distances.”

Victims of the crash were taken to Addington, R.K. Khan and St Augustine’s hospitals in and around Durban. Most of them had been released by yesterday afternoon.

Nhlanhla Mhlongo (19) was among three others in a critical condition yesterday morning, but her condition seems to have stabilised since then and she is likely to be discharged over the weekend.

Nqobile Sibiya (26), who escaped injury, said he had been asleep at the time of the accident.

“I didn’t see what happened. I was asleep and when I woke up, the bus was like this and everybody was screaming,” he said.

Cele said: “We will be visiting the injured victims and hope for their speedy recovery. We will also continue to enforce the law on our roads to ensure safety.”

• Bongani Hans reports that two motorists, including one in a learner truck, were trapped inside shattered vehicles for two hours after a head-on collision on the Georgedale main road yesterday at midday.

The paramedics called the Fire Department to help free the critically injured drivers.

There were also two injured passengers at the scene.

Netcare 911 took the patients to St Anne’s and other hospitals.