SIFISO Ntshiza (22) — among the first cohort of boys at Zakhe — almost did not make it to matric at Zakhe. In Grade 10, he dropped out because his family could not afford the fees. College director Richard Dladla sought him out, established the reason for the sudden disappearance of the promising pu... 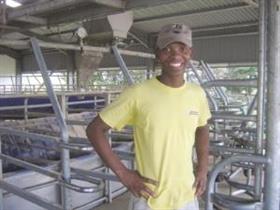 SIFISO Ntshiza (22) — among the first cohort of boys at Zakhe — almost did not make it to matric at Zakhe. In Grade 10, he dropped out because his family could not afford the fees. College director Richard Dladla sought him out, established the reason for the sudden disappearance of the promising pupil, and secured a bursary which enabled him to continue.

“Today, Ntshiza is managing a share-milking operation — Grassy Park Dairy Trust — in the Kamberg. Co-owned by Anthony Galliers, the farm has about 700 cows and produces up to 10 000 litres of milk daily.”

This year, Ntshiza embarked on a three-year diploma through Unisa. His studies are being sponsored by his employer.

Through the networking efforts of Curries Post dairy farmer Judy Ross, Ntshiza was apprenticed after school for over a year with German farmer Andreas Thiessen in the village of Tolk.

Ntshiza says the experience gave him a strong work ethic. “German farmers are hard workers. They do not have labourers and on summer days we often worked until 10 pm or for as long as there was sunlight.”

When his mentor was hospitalised for six weeks for a back operation, Ntshiza, together with Thiessen’s wife Elizabeth, virtually ran the show, tending about 50 head of cattle and crops such as barley, wheat, rape, sugar beet and maize.

Given his experience, it was easy for him to find a job on returning to South Africa. “I chose to work with Anthony because I heard good things about him.”

Born in rural Underberg, Ntshiza was sent to Zakhe after his mother heard about it on the radio. “I wasn’t sure then whether I had a love for farming but my mom sort of forced me. But when I got to Zakhe, the place motivated me,” he said.

“Most people think farming is hard, dirty work. But I see it as every career in one. There’s something different every day.”

“I’d like to manage my own farm one day,” he said.

He is also committed to the future of his alma mater. During their time at Zakhe, Ntshiza was among a group of boys who established a chapter of Agriculturalists without Borders (AgWB), which works with the Engineers without Borders at Johns Hopkins in helping communities with food security projects. Ntshiza also helped set up a Zakhe old boys’ organisation with the hope of fundraising for school bursaries and helping communities with agricultural projects through AgWB.

“Agriculture is everything,” said Ntshiza. “But I worry about the land reform thing. In Germany, the government gives funds to farmers, so they take it seriously and are highly skilled. People here need those levels of skills. Schools like Zakhe can make a difference.”

“But if it weren’t for Richard [Dladla] I would not be here. I am so proud of what I am doing and I also have to say thanks to the school’s staff and to Judy [Ross], my family for their support, and to Anthony for believing in me.”