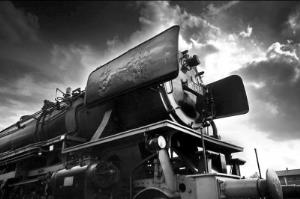 “WHAT?! Are you mad, koelie­? Do you think you’re in India? This is South Africa, you know!”

“So you are not going to give me free ticket?”

The station master looks past the dhoti-clad Indian to the next traveller, waiting for him to call his destination.

“Step aside, koelie, there’s more people waiting for a ticket. And they want to pay for it.”

That remains to be seen. The queue of Indians behind the man they call Babuji listens in silence to the quarrel starting in front. In a few minutes’ time the train will arrive, but unlike other days there is no jostling as the Jo’burg-Durban train approaches. The reason is the man in front of the queue, Babuji.

Babuji is a regular appearance in Ballengeich, a mining settlement just south of Newcastle. According to the locals he is a seer. With his white dhoti that more or less covers his body, his walking stick, bare feet and round glasses, he looks like Gandhi. The “Gandhi of Ballengeich” possesses supernatural powers which have astounded the mining community. With Babuji around something special is just bound to happen.

Today, a cold winter morning in June 1943, will be one of those days. Babuji had queued up before the “non-whites” ticket window of the station building, as usual without a penny. He had decided to go to Dundee. If the ticket seller would let him into the train, that is.

Behind Babuji everyone remains silent.

“Where to?” the Empire servant barks to the man behind the seer. The greying Indian dressed in a winter coat stares back blankly. Silence reigns. It is a uniting silence that doesn’t give the representative of the British Empire much hope of any further ticket sales.

“I am not stepping aside till you give me ticket. No ticket, no train,” says the prophet.

“If you do not step aside I will have you arrested,” it sounds from behind the counter. Babuji does not move an inch. Nobody commands him around, least of all an aangori walla.

“You’ve asked for it,” points the finger of the British Empire.

The ticket seller steps outside towards a man in the brown uniform of the railway police, has a brief chat and walks back in.

With an expression of now-we-will-see-who-is-boss-here on his face the British ticket Lion returns to his position behind the counter as the brown uniform steps towards the white dhoti. He grabs the Indian by the shoulders and pushes him out of the queue.

“If you dare trouble us again I’ll lock you up, understood?”

Threats are surely not an appropriate way to make Babuji change his mind.

“You can push me and lock me up, but train will not move. You give me free ticket, your train will move”. He puts his hand into a little sack, half hidden under the cotton cloth which is draped over his shoulder. The seer then throws something of the contents on the railway track, seats himself on the platform quarries, his legs crossed in meditation, and starts uttering unintelligible sounds. The train comes within sight of the waiting travellers and the police. A few seconds later the sound of steel on steel cuts through the winter air. The train comes to a screeching halt 100 metres from the platform, right next to a surprised line gang of railway workers. The engine driver jumps down among the group shouting insults. But there is nothing in front of the wheels and the gang is clearly innocent of any wrongdoing. The conductor hangs out of the last carriage gesticulating that the emergency brake hasn’t been pulled. Irritated, the engine driver turns to the station master who points at the meditating Indian. Surely that muttering fakir hasn’t stopped the train with his incense ashes? It must be something with the engine. The best thing he could do was to phone Newcastle for an expert.

As he walks into the office the ticket man steps towards Babuji who is untiringly reciting mantras and throwing ash around.

“You can take 3 000 elephants to pull, but train will not move. You give me ticket and train will start,” it sounds from knee height, immediately followed by a string of indefinable words.

At least 100 curious spectators are standing on the platform and on the road along the station when half an hour later the expert from Newcastle arrives. With big steps he strides towards the anchored engine, ignoring the crowd.

That day, after a further two fruitless hours of mechanical scrutiny by the expert, the magician finally got what he wanted.

“For Pete’s sake give that man his ticket. He has done this before. Every time he did it he messed up our time table”, was more or less the reaction from the Newcastle Office when the station master asked them for advice. No sooner had he received his free ticket than the 50 tons of cast iron and steel, only seconds ago still seemingly welded to the tracks, started moving. It ran into the station, took water, Babuji and the other passengers in and left the station five minutes later, leaving the spectators dumbfounded. To prevent any further delays due to obstinate ticket sellers in future he received the reassurance that in future all trains were to take him free of charge. They came up with the idea of a medallion, which Babuji went to collect at the Union Railway office in Newcastle. It read:

“By courtesy of His Royal Highness the bearer of this medallion is granted free entry to all public transport.”

Wandering around between Dundee and Newcastle for the next 16 years he acted as a fortune teller, doctor and psychiatrist. His arrival in Ballengeich became a ritual.

“Babujiiiiii,” it would sound as soon as the Empire beater had got off the train and crossed the railway tracks. This was the sign for one of the children to catch a cock while a second ran to the neighbour half a mile down the road for a full calabash of home made beer. The potentate desired no less than the fattest cock and two litres of beer, preceded by a thick soup of lentils.

Nobody in Ballengeich ever saw Babuji carrying any money on him. He believed that if he ever accepted money for his healing work he would lose his powers and was therefore always paid in kind: camphor, incense, a new dhoti, a calabash of home-brewed beer.

When he had become too old to travel, Babuji found refuge with the Murow family, where he spent the last two years of his life. The family lived on a hill overlooking the station and the mine. In their mud house he shared a room with Sichander, one of the sons. It was here that he received his last call on a cold winter morning in 1961.

It was four o’clock and still pitch dark. In the Murow household Sichander, the eldest son, was lighting the coal stove. As he stood with his back to the door opening, he felt something coming in. He turned around just in time to see a white fluorescent ball rolling over the veranda and disappearing behind the door of the room he and Babuji shared. Excited, Sichandar grabbed the poker and sneaked to the door.

“Babuji, wake up, quickly. There’s somebody in your room!” he shouted while crossing the veranda. As he was about to open the door he heard the quiet voice of Babuji:

“Don’t open the door. I know what it is. Just tell everybody to stay home today.”

Sichandar posted himself at the door, mesmerized by the sharp white light shining through the crack of the door. But it remained quiet in the room and after five minutes of waiting with the poker in an attack position he walked off.

“Just go on with your work and it will disappear,” his mother told him.

But when the intruder came out of the room Sichandar decided to follow the phenomenon, repeatedly trying to hit it. His attempts were futile. On his return he found Babuji sitting in his bed, unhurt.

At seven o’clock Babuji walked to the outside toilet, washed himself and went back inside. A little later when Sichandar opened the door to take breakfast to his roommate he found the room tidied up. With a smile on his face Babuji lay on his bed with staring eyes, his medallion clenched in his hand.

ROBERT de Neef first set foot on African soil in Harare in 1984 and fell in love with the continent. Gone were his teaching days in Holland. A refused South African work permit for Namibia allowed him to meet his future wife in Nigel. She followed him first to Holland where he completed his studies, and later to Togo. They returned to South Africa in 1998 with a son and a growing faith. Daily bedazzled by his new homeland, Robert spends his working days as an engineer with one of the provincial departments.