IF a Maritzburg United side on a high allow themselves to get cock-sure, then they might entertain the idea that SuperSport United are there for the taking in tonight’s Premier Soccer League game at Harry Gwala Stadium.... 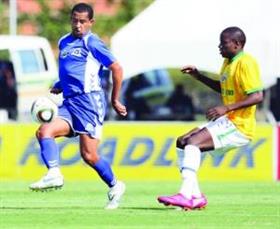 IF a Maritzburg United side on a high allow themselves to get cock-sure, then they might entertain the idea that SuperSport United are there for the taking in tonight’s Premier Soccer League game at Harry Gwala Stadium.

But it would take a brave or foolish team, even one that has gone four matches unbeaten and just beaten Mamelodi Sundowns 2-0 in a Telkom Knockout quarter-final, that allowed itself to suppose that any game against Gavin Hunt’s three-time successive champions will be anything but a battle.

SuperSport’s patchy start to the season has gone from bad to worse in recent weeks, suffering demoralising defeats against Kaizer Chiefs, 2-0 in the league, and Orlando Pirates, 3-0 in Saturday’s Telkom quarters at Loftus.

The losses have left once almost impregnable fortress SuperSport looking decidedly vulnerable. But it is also a backs-to-the-wall situation that could make the Tshwane team lethal.

“The word I would use is dangerous,” United coach Ernst Middendorp said. “They know they need points and to turn the team around soon.

“I said to the players straight after Sunday’s game already — we need to see the same effort with the same concentration from beginning to end against SuperSport.”

In SuperSport’s favour is that they have had an extra day’s rest from their defeat against Pirates, while Maritzburg must lift themselves from a high intensity cup tie against Sundowns.

“I’m not really concerned about this with most of these guys, who had the same sort of programme for most of last season,” Middendorp said.

“Perhaps where I am concerned is with players like Diyo Sibisi, who did not often play two matches in a row for Ajax, and Fabian McCarthy, who barely played last year.

“But today in training it went well. In the end the mindset must be right. Gavin Hunt also has his own issues with injured players and players coming back from injury.”

SuperSport have been suffering from long-term injuries to key striker Glen Salmon and defender Thabo September. Bradley Carnell returned from injury against Pirates, but the veteran left-back was exposed for pace by winger Dikgang Mabalane.

An injury to Emille Baron, too, has left Hunt relying on back-up goalkeeper Wayne Brown, who has been shaky.

Nonetheless, SuperSport are a famously resilient team under the stewardship of a renowned competitor in Hunt. And, despite the coach’s intention to delve into the transfer market in January, the champions still possess plenty of quality — the type of players who have won championships and will be highly competitive should they click into gear.

Right now though, United’s focus should be on their own quality. The team is blessed with pacy and skilful attackers such as Rudolf Bester, Felix Obada and Diyo Sibisi, and youngsters JB Ncubeni and Sheldon Lawrence.

Ghanaian John Arwuah is a class defensive midfielder and Chilis Madondo a big prospect in the same position. The defence have conceded one goal in four games.

Middendorp has some decisions to make in the wake of the suspensions picked up against Sundowns of goalkeeper Shu-aib Walters and Arwuah’s impressive left-footed defensive midfield partner, Bevan Fransch.

At goalkeeper, Johnny Mathole has been the season’s No. 2 ahead of Tashreeq Goldman, and the former Chiefs youth product is set to make his PSL debut.

Defensive midfielder Musa Nyatama is in the squad, but a question mark to return from the knock he received to his ankle in United’s 0-0 draw against Platinum Stars in their last league game in Rustenburg. Kurt Lentjies remains out of the squad with his hamstring injury.