Bafana bust a gut in last training before Confed axe

IN one of Bafana Bafana’s last training sessions prior to the “thinning of the herd”, the entire 29-man squad was busting their guts on the practice field to impress the coach before the axing.... 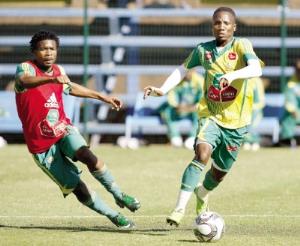 IN one of Bafana Bafana’s last training sessions prior to the “thinning of the herd”, the entire 29-man squad was busting their guts on the practice field to impress the coach before the axing.

Today, at a press conference at the Sunnyside Hotel in Parktown, South Africa coach Joel Santana will axe a further six players from his squad to make up the 23-man team that will represent South Africa in the 2009 Fifa Confederations Cup.

Bafana’s locally-based players have been in camp since the end of the 2008/09 Premier Soccer League season and during the course of this week all the overseas-based players joined up with the squad.

South Africa, who beat Mauritius 2-0 in a friendly on the weekend, play Poland in their final friendly warm-up ahead of the Confed Cup at Orlando Stadium on Saturday.

Bafana open their Confed campaign against Iraq at Ellis Park on June 14, before playing New Zealand at Royal Bafokeng Stadium in Rustenburg on June 17, and world number one-ranked Spain in their final Group A game at the Free State Stadium in Bloemfontein on June 20.

The training camp has taken place at Milpark in Johannesburg, the home of PSL side Wits University.

“We all want to prove a point,” said midfielder Panathinaikos defender Bryce Moon ahead of the axing. “A lot is at stake and we all want to be part of the Confederations Cup team.”

The stress on the faces of the players was evident during training, but after the 23-man squad announcement is when the real pressure starts. After that squad is named, those Bafana players can be held accountable for their performance in the upcoming “Mini-World Cup”.

South Africa will look to wrap up their preparations and test their final squad selection for the upcoming Fifa Confederations Cup this Saturday when they host Poland in an international friendly at Orlando Stadium.

The most important thing on the mind of Santana, barring his selection woes, will most likely be South Africa’s poor record against European opposition.

Bafana have faced teams from Europe on 29 occasions and have only managed a measly five victories, having lost on 16 occasions. Santana will certainly not want to lose a friendly match before the start of the most important tournament in his life, and will go to all ends to ensure victory.