Morale Boost: First win in 7 matches JOHANNESBURG — Bafana Bafana finally ended their goal drought and scored a much needed 3-0 win over Malawi in a friendly international played at the Germiston Stadium last night. 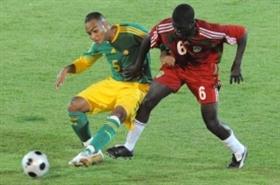 JOHANNESBURG — Bafana Bafana finally ended their goal drought and scored a much needed 3-0 win over Malawi in a friendly international played at the Germiston Stadium last night.

The highlight of the game was the two goals by striker Bernard Parker, who scored in each half, and a superb goal in the 90th minute by super-sub Daine Klate. It was Klate’s first goal for his country.

This was a much-needed morale- boosting win, but Malawi are no world beaters and coach Kinnah Phiri brought a side that looked to be ready for the slaughter. They tried hard but could not match the home side in any department.

It was Bafana’s first win since they defeated Equatorial Guinea 4-1 in an African Nations cup qualifier at home in June.

But a win is a win and after only one win in seven matches under head coach Joel Santana, both he and the country will be happy with this result.

The positives were that Parker looked good and stretched his PSL goal- scoring form into the national side and Santana gave the unknown Orlando Pirates defender Rooi Mahamutsa his debut, replacing Siboniso Gaxa in the 75th minute.

There were few bad performances in this Bafana side. Gaxa, Teko Modise, Siphiwe Tshabalala Robyn Johannes at centre back were all solid. All the players on the bench, expect for reserve keeper Moeneeb Josephs, got a run and that was the aim; for Santana to watch his fringe players under competitive conditions.

Bafana broke their long goal drought when Parker headed home Tshabalala’s corner for the only goal of an otherwise uninspiring first half in the 32nd minute.

Bafana coach Joel Santana has finally got the message that attack is the best form of defence when he ditched his conservative system and opted for a more attacking and sensible 4-4-2 formation.

But it was the Malawi Flames who did the early attacking. Bafana keeper Itumeleng Khune was forced to make two saves within six minutes. He was unable to prevent Noel Mkandawire’s shot going for a corner and did well to stop a long range shot from Chiukepo Msowoya.

But after that attack it was all Bafana, who looked like they were going to struggle get the ball past goalkeeper Trust Lunda. Eleazar Rodgers failed to connect a great cross form right back Gaxa in the eighth minute and then Lunda denied Parker a goal with a good save.

Bafana skipper Modise had a free run in the midfield shot wide after 17 minutes. Then came Parker’s goal. It was his first goal for his country and his fifth goal of the season.

Phiri made two surprising substitutions four minutes from half time. He replaced Mkandawire and Davie Banda with Josephy Kamwendo and Peter Wadabwa.

Modise tried his luck with a long range shot that flew over the Malawi crossbar in the 53rd minute as they looked for that second goal to take the game away from the visitors.

Modise had his shot on the hour mark blocked on the way to goal by Malawi skipper James Sangala. Lunda smothered a Parker shot three minutes later.

Substitute Diane Klate wasted a glorious chance to make it 2-0 in the 77thminute when he was set up by parker, but the SuperSport united winger shot wide when he had the goal at his mercy.

But Parker made it 2-0 when he finished off a pass from substitute Katlego Mashego in the 81st minute.

Klate then added the cherry on top when he blasted home goal number three in injury time.