BAFANA Bafana’s coaching staff and players believe that the African Nations Cup in Ghana showed the team have potential for the future, despite crashing out in the first round after their 1-1 draw against Senegal here last night. 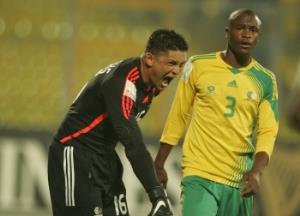 BAFANA Bafana’s coaching staff and players believe that the African Nations Cup in Ghana showed the team have potential for the future, despite crashing out in the first round after their 1-1 draw against Senegal here last night.

South Africa’s Elrio van Heerden opened scoring against Senegal in the 15th minute, but Senegal equalised through Henri Camara near the end of the first half. Bafana had numerous chances to score a winner in the second half but could not put the ball in the back of the net, and hit the upright in injury time.

With two draws and a defeat, and three goals scored, South Africa improved on their performance in Egypt two years ago, where they lost all three games and did not score. While the Bafana camp remained optimistic, coach Carlos Alberto Parreira can expect some criticism and backlash from the media over the exit.

Parreira said that, while the first-round exit was disappointing, the goal of chosing a young team to gain experience in Ghana and build towards the 2010 World Cup had been achieved.

“It is a new team and it was the first time for many of the players to be in a competition like this,” Parreira said in the post-match press conference.

“I think we will go back home with some positives. The players have gained experience, they have learnt a lot about a high level of football, and the process of learning is still going on.”

Asked if he will keep the current team together, Parreira said: “We don’t have any option. We brought a young team here exactly to get the experience and to build a team over the next two years that can represent South Africa at the World Cup in the best possible way.

“We are in a process of learning. For so many years South Africa did not renew the team, so that is why we have had to bring in new faces. And, naturally, in this building process you will pay a price.

“But of course for the World Cup we need to improve much more than what we played here.”

South Africa’s captain, Aaron Mokoena, agreed that sacrifices had to be made at this Nations Cup to build for the future.

“These youngsters came out here and did their best and I don’t have any doubt that we can have a strong team in 2010,” he said.

Bafana assistant coach Pitso Mosimane identified the discovery and performances of two new, young full-backs, Tsepo Masilela and Bryce Moon, as one of the big positives of the tournament.

“This was a completely new team assembled just before the Nations Cup and I think if we keep the team they will gain more experience and grow,” he said.

South Africa’s star player, Everton midfielder Steven Pienaar, said an incorrectly disallowed goal in the team’s 1-1 opening draw against Angola could have made all the difference.

“That was the turning point, but it happens in football,” Pienaar said. “We played some nice football in all the games so I think there is a bright future for the team.”